The University of Virginia football players killed while on their way back from a field trip earlier this week died from gunshot wounds to the head, the Office of the Chief Medical Examiner confirmed.

An administrator for the medical examiner’s office confirmed the causes of death for Lavel Davis Jr., D’Sean Perry and Devin Chandler in an email to The Associated Press, and noted that the manner of death for all three men was homicide.

The victims were among several students who had traveled to Washington, D.C., on Sunday for a field trip to see a show. They were returning to the Charlottesville, Virginia, campus and were on a bus with about two dozen people around 12:35 a.m. Monday when Christopher Darnell Jones Jr. allegedly opened fire.

Jones, also a student who attended the field trip, was previously a member of the football team.

Before the shooting, Jones "got up and pushed [victim] Lavel [Davis]," witness Ryan Lynch, 19, told local news station KYW-TV. "After he pushed him, he was like, ‘You guys are always messing with me.’ He said something weird like that. But it was very bizarre because they didn't talk to him the whole trip."

Lynch reportedly said he thought Jones "was going to shoot everyone on the bus at that point."

"There just kept coming more and more gunshots. The shooter then sort of, just walked or skipped off the bus when I saw him pass," Lynch told the station. She described how one of the victims "just had so many gunshots in him."

One of the three victims was sleeping at the time of the shooting, prosecutors said. 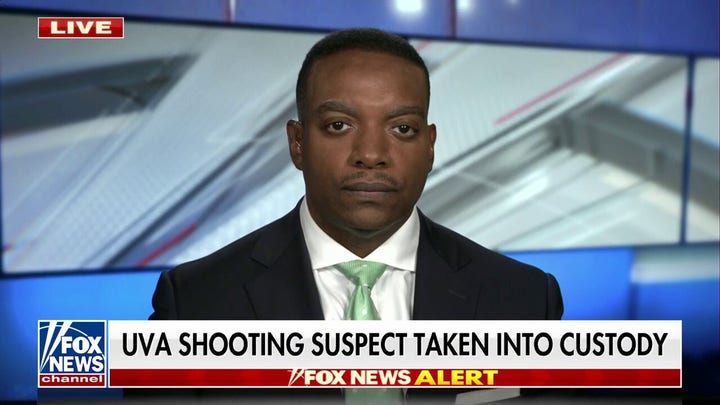 Two other victims were hurt but survived.

Jones has been charged with three counts of second-degree murder, among other charges. A manhunt for the 23-year-old ended hours later.

UVA Police Chief Timothy J. Longo said Jones had a disciplinary history with the university for a hazing incident and was allegedly involved in a past weapons investigation.

A memorial service to honor Chandler, Davis and Perry is scheduled for Saturday on the UVA campus.

Fox News Digital's Danielle Wallace and The Associated Press contributed to this report.