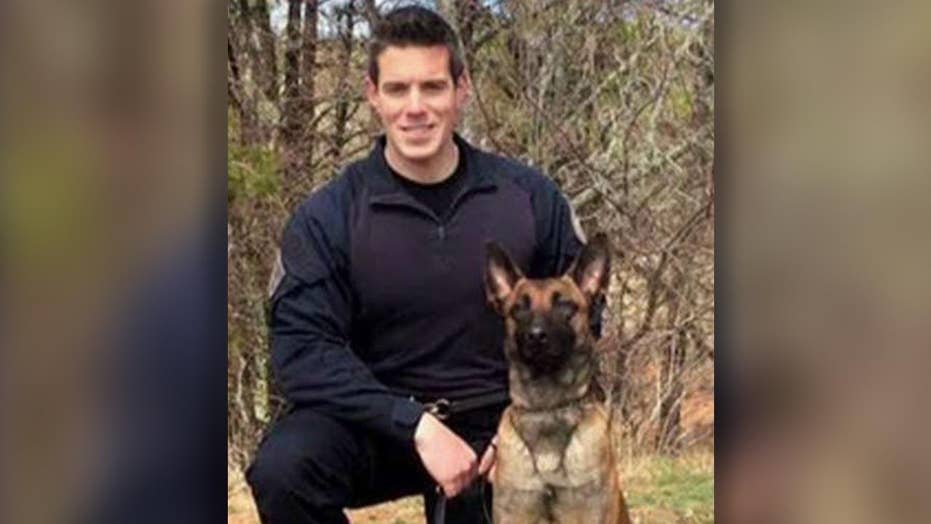 Officer Shawn Gannon was shot in the head and killed in Cape Cod, Massachusetts while pursuing a suspect; Lauren Green has the latest on the investigation.

A funeral was scheduled for Wednesday morning for a Massachusetts police officer who was fatally shot last week while serving a warrant.

On Tuesday evening, thousands of police officers and other mourners attended a wake to pay their respects to Officer Sean Gannon, 32, at St. Pius X Church in Yarmouth, Boston’s Fox 25 reported.

Around 5:30 p.m. an hours-long procession of mourners traveled from the funeral home to the church, the station reported.

“Women, children, men and boys, every one of them was quiet, respectful. The first time I think I could I think hear a pin drop and you could hear it on Route 28,” Yarmouth police Chief Frank Frederickson told the station.

Gannon and other officers were serving the arrest warrant last Thursday at a home in Barnstable. Authorities said they were confronted by a suspect identified as Tom Latanowich, 29, of Somerville, Mass.

He was arraigned on a murder charge without bail, MassLive.com reported.

Latanowich has a long history of more than 100 criminal charges, Yarmouth police said. He surrendered after barricading himself in the home for several hours, according to police.

His arrest has police and others in Massachusetts calling for an “overhaul” of the state’s judicial system to include reinstatement of the death penalty for cop killers.

Gannon, who was married, was an eight-year veteran of the Yarmouth department.

He was remembered in his obituary for his "high moral integrity, infectious humor, and collaborative work with colleagues."

Gannon's dog, Nero, also was shot but underwent surgery and is recovering.

Fox News’ Elizabeth Zwirz and the Associated Press contributed to this story.