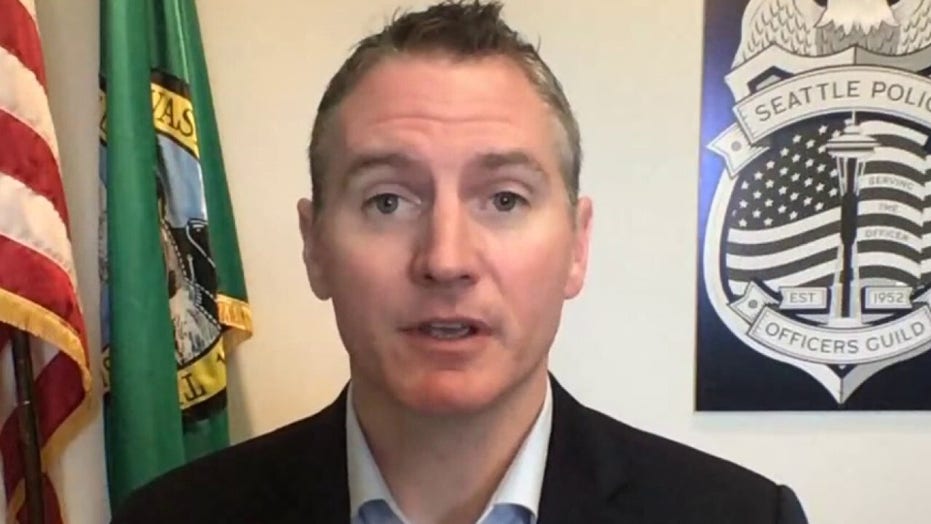 Seattle police union chief on ‘CHOP’ zone: The officers and community are in 'grave risk'

Seattle Police Officers Guild President Michael Solan reacts to the city’s mayor calling on officers to return to the abandoned precinct inside the ‘CHOP’ zone.

Community leaders and an activist whose brother was killed by Seattle police in 2016 are urging protesters occupying the Capitol Hill Organized Protest, or CHOP, to leave by Wednesday night.

In a statement addressed to “comrades in the struggle” posted on social media Wednesday, CHOP organizers declared, “It is time we shift to the next phase of our organizing and move from direct action to virtual activism.”

“The CHOP project is now concluded,” the lengthy message said. “While we expect a very small handful of holdouts may try to remain in the CHOP no further organizing will be occurring to support this presence and the number on-site will be too small to be more than an annoyance for pedestrians rather than a zonal blockade."

“We have been briefed that full rehousing of the SPD East Precinct staff into the station will occur no later than early next week and will be preceded by the removal of barriers and the reopening of streets to traffic,” the statement said.

Andre Taylor, who founded the organization Not This Time, which aims to reduce police violence, said Tuesday that the four recent shootings in the area protesters initially called the Capitol Hill Autonomous Zone, or CHAZ, distract from important messages about racial injustice. His brother, Che Taylor, was fatally shot by Seattle police in February 2016.

“If there was no violence you should've stood there for as [long as] you wanted to stay there, but the violence creates a different narrative where the people in authority have to look at it differently,” Taylor told KING-TV.

Tuesday marked the 15th consecutive night protesters have occupied the Seattle’s Capitol Hill neighborhood, which includes the abandoned East Precinct, which officers were ordered to pull back from following a week of clashes between police and demonstrators in the wake of the death of George Floyd in Minneapolis on May 25.

People walk amidst barricades in what has been named the Capitol Hill Occupied Protest zone in Seattle Monday, June 22, 2020. For the second time in less than 48 hours, there was a shooting near the "CHOP" area that has been occupied by protesters after Seattle Police pulled back from several blocks of the city's Capitol Hill neighborhood near the Police Department's East Precinct.  (AP)

Lorenzo Anderson, 19, was shot and killed in the CHOP early Saturday morning. A second man shot Saturday remained hospitalized in satisfactory condition. A third person, a 17-year-old, was shot Sunday night and has been released from the hospital. A fourth shooting early Tuesday morning left a man hospitalized also in satisfactory condition, KOMO reported.

“Our community does not support the violence,” Taylor told KOMO in another interview. “'Oh, somebody just got shot but Chop, Chop, Chop? Wait a minute, but you’re just going to look over this black man that got killed over here? This young baby; this 19-year-old? No. No. You’re going to pause and you’re going to think about this black man because that’s the reason you did it for.”

Mayor Durkan said Monday she planned to dismantle the CHOP after a weekend of violence in the area protesters deemed a “no cop, co-op.” Police Chief Carmen Best said that officers would soon return to the East Precinct, but Durkan vowed she would first work with community organizers to convince protesters to disband before using police intervention.

Taylor said Tuesday that he attempted to broker a meeting between Durkan and some of the CHOP organizers, but the organizers canceled at the last minute, KING reported. He said he planned to bring a group of pastors to the CHOP to convince them that their movement “won’t be stuck to a place.”

“CHOP is an idea and with that idea, you can take this idea around this country and then around this world,” he said. “Ideas can't be killed.”

Police have said his brother, Che Taylor, a known felon, disobeyed commands to put his hands up before reaching for a handgun in his Ford Taurus when officers fired, KING reported.

King County Prosecutor Dan Satterberg said in January 2019 that charges would not be filed against the officers. He cited Washington state law that deems a police officer "shall not be held criminally liable for using deadly force without malice and with a good faith belief that such act is justifiable," KIRO reported.

Taylor’s organization is advocating for Initiative 940, a bill that would make it easier to bring charges against officers who use deadly force among other police reforms.