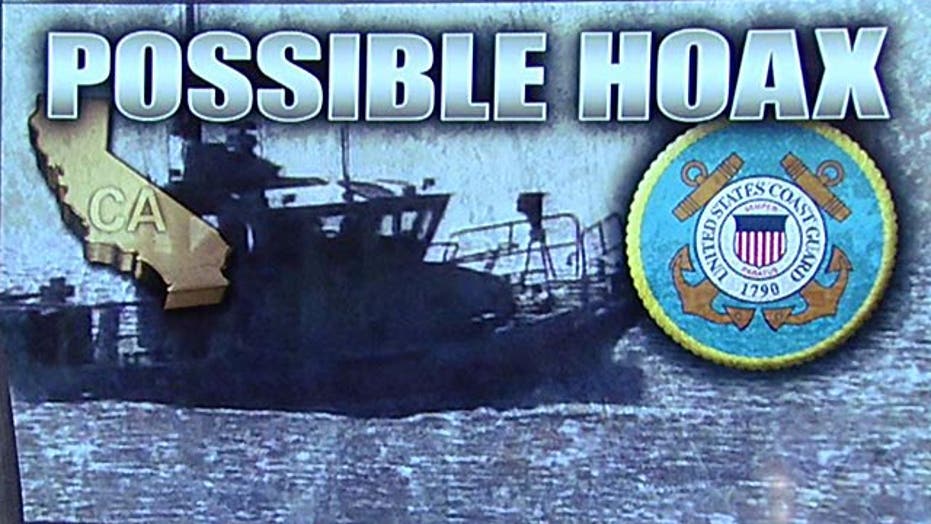 Despite an extensive 42-hour search, the Coast Guard has been unable to find a boat reported missing off the Monterey coast this week, prompting authorities to consider the sinking may have been a hoax.

The multi-agency search for the family of four reported to be onboard covered an area as large as the state of West Virginia, and involved several ships, helicopters and hundreds of rescue workers.

With the assistance of the Navy and California Air National Guard, crews made 34 searches since receiving the first distress call Sunday afternoon when the boaters said their 29-foot sailboat was taking on water and their electronics were failing.

The Coast Guard is treating the incident as a rescue, with the possibility the calls came from a trickster. Neither the family nor the boat has been reported missing.

Officials say they're still tallying the rescue efforts' cost but estimate it ran into the hundreds of thousands.

Coast Guard Executive Officer Noah Hudson in Monterey paused, sighing, on Tuesday when asked how he felt when a search is called off.

"It's tough for me thinking that we had four people out on the water who were in need of rescue, and to think there might have been loss of life in this case, it's tragic."

But if it was a hoax, "it's unfortunate that we were forced to use so many resources for so much time," Hudson said.

The boat had no working GPS system, but investigators used its radio signal and radar to determine the call came from an area about 60 miles west of Monterey, where strong winter winds, cold water and big swells made for perilous conditions. Forecasters had issued a weekend advisory warning boaters of rough seas in the area.

An hour later, the family members reported they had to abandon the boat and were trying to tie together a makeshift life raft out of a cooler and life-preserver ring, a method taught in survival classes. The Coast Guard then lost radio contact with the boat, which the agency said might have been called the "Charmblow."

Investigators determined from the broken distress calls that the family included a husband and wife, their 4-year-old son and his cousin, Coast Guard Lt. Heather Lampert has said. But the agency received no reports about a family missing at sea.

On Monday, the Coast Guard released one of the recorded calls in hopes that it would lead to new information from the public that could help in the search.

Sailors along this renowned stretch of coastline are a close-knit group who were gripped by the news of the missing family, but also baffled by important omitted details. Harbor masters at the string of ports that dot the coastline from Monterey to Half Moon Bay told The Associated Press the same thing: No missing boat launched from their docks, and no family was missing from their community.

FBI spokesman Peter D. Lee in San Francisco said the agency was not investigating and had received no missing-persons reports that could be this family.

Sunday's choppy conditions had smoothed to flat, glossy seas by Tuesday, and in harbors, neither officials nor boaters had heard of a vessel called "Charmblow." But several noted that boats are registered in California by number, not name. Owners can call a boat whatever they want. Federally registered boats use names, but there was no "Charmblow" listed on the federal database.

Capt. Gene Maly, a 40-year veteran of sailing who runs a charter sailboat out of Monterey, said the entire incident might have been a hoax. But the Czech native, who has logged 80,000 miles at sea, said it's also possible that ill-prepared sailors set out without the proper training and equipment.

"It could be that these people are neophytes and had no clue," he said. "The last thing you want to do is abandon ship."

His care is typical in the deceptively mild Monterey Bay, a federally protected marine sanctuary where in just a few minutes, placid blue water can turn to roiling waves, huge sneaker waves surge over gentle currents, and sunny skies can grow dark with fog.

"Very often people underestimate ocean safety," said Hanna Tuson-Turner, a sailing instructor in Half Moon Bay. "Weather systems can come from out of nowhere and equipment can malfunction."