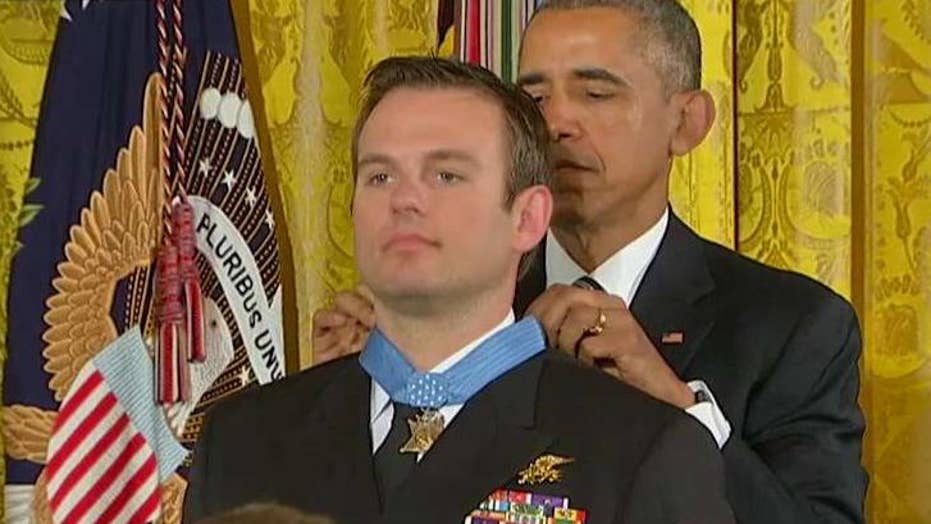 When Navy SEAL Edward Byers Jr. told his mom, Peggy, he would be receiving the Medal of Honor at the White House on Monday, she had one question: “Can I come?”

President Barack Obama laughed as he recalled the story before placing the nation’s highest military honor around Byers’ neck.

“Yes, mom, you’re allowed to come when your son gets the Medal of Honor,” Obama said.

Byers is the sixth SEAL Medal of Honor recipient and the first living one since the Vietnam War, The Navy Times reported. Byers is the 11th living service member to receive the Medal of Honor for fighting in Afghanistan, according to Stars and Stripes.

Byers is a veteran of 11 deployments and nine combat tours. He has received five Bronze Stars with valor and two Purple Hearts.

Byers was seemingly training for a military career his whole life.

Byers’ father, now deceased and buried at Arlington National Cemetery, served in the Navy during World War II. Growing up, Byers would put on camouflage and hide out in the Ohio woods playing military with other neighborhood boys.

“And I expect the other kids did not stand a chance,” Obama said.

Neither did the Taliban fighters in Afghanistan that Byers fought on Dec. 8, 2012 -- actions that earned him the Medal of Honor.

On a mission to free a captive doctor who is a U.S. citizen, Byers performed numerous valiant acts, displaying little regard for his own safety. Fully exposed to enemy gunfire, he ripped down six blankets that served as a makeshift door for the Taliban hideout. At one point, he struggled with a Taliban guard with one hand while adjusting his goggles with the other. Later, he shielded the doctor from oncoming fire with his own body while incapacitating a militant using only a hand around the fighter’s throat.

“Even if he had never performed the actions for which he is being recognized here today, Ed Byers would be recognized for his compassion and his endurance,” Obama said.

But the mission did not come without loss. Byers’ friend, Nicholas Cheque, was the first man through the door and was immediately shot by militants. Byers, a trained medic, tried unsuccessfully to revive Cheque on the helicopter flight back to Bagram Airfield.

Obama memorialized Cheque, who was posthumously awarded the Navy Cross, according to The Washington Post.

“Back in Monroeville, Pennsylvania, they remember him as the driven kid,” Obama said. “A football player and wrestler who always wanted to be a SEAL.”

Calling the SEALs a “strategic national asset,” Obama said examples like Byers and Cheque “teach us that humans are more valuable than hardware.”

“The American people may not always see them, we may not always hear of their success, but they are there – in the thick of the fight, in the dark of the night achieving their mission,” Obama said. “We thank God they’re there.”