Members of the Hart family are seen at an event in Astoria, Ore., in June 2014. (The Oregonian via Associated Press)

One of the Hart moms who died when an SUV fatally plunged off a Northern California cliff last month had sent a text two days before the crash was discovered, saying she was so sick she might need to go to a hospital, 911 call records from Washington state say.

On March 26, Cheryl Hart called 911 to report that she had not heard back from Sarah since then, the Statesman Journal of Salem, Ore., reported.

"Nobody has been able to get ahold of her, talk to her or seen her since ... or her wife, which is Jen," Cheryl Hart told the dispatcher at 1:15 p.m. March 26. She also said she had checked hospitals, but none said they had a record of treating Sarah Hart.

Several hours after Cheryl Hart alerted authorities, the Hart family's SUV was discovered at the bottom of a Mendocino County cliff, about 100 feet below the Pacific Coast Highway. Authorities found the bodies of Sarah and Jennifer Hart and three of their six adopted children.

The other three children remain missing, although on Saturday a body was pulled from the surf in that area and authorities are working to determine if it is one of the missing children.

Deputy Bill Holcomb looks down a cliff near the site where the Harts fatally plunged into the rocky Pacific Ocean below, March 29, 2018. (The Oregonian via Associated Press)

Records released this week show Child Protective Services in Washington state tried to contact the Harts on March 23 after abuse allegations were made against them. An official had gone to the Hart’s residence in rural Woodland, Wash., but nobody was home, records said. The official left a card.

Two officials returned March 26 — the day the Harts' SUV was found — and the card from the Friday before had been removed. One of the officials left another card and called law enforcement to request a welfare check.

In 2011, Sarah Hart was convicted of domestic assault in Minnesota for physical abuse involving one of the children, according to court records. The Harts were also investigated in 2013 when they lived in Oregon after a family friend reported witnessing abuse toward the children. 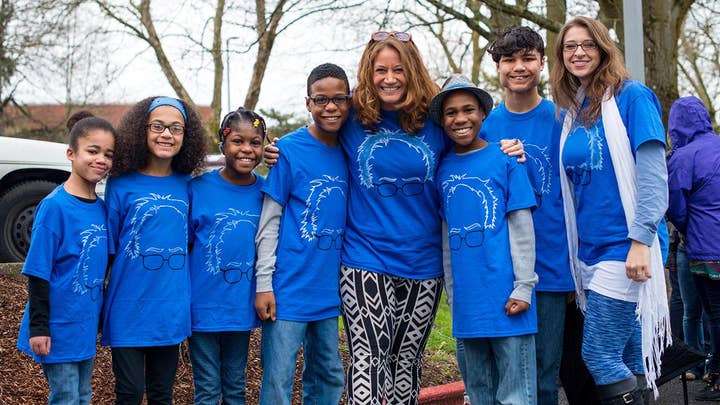 According to three friends who knew the Harts when they lived in Minnesota in the mid-2000s, the couple fostered a teenage girl who was not among the six who died in the fatal crash, the Seattle Times reported Tuesday. According to the report, the accounts the Minnesota friends gave of the Harts are at odds with the allegations of abuse that have followed the Harts. But accounts do differ on how long they fostered the girl.

Authorities said previously that evidence suggested the fatal crash was deliberate. They said the SUV had stopped at a coastal highway overlook before speeding straight off the cliff and plummeting into the rocky ocean below.

Deputies will continue to search the county's Pacific coastline for the missing children, the Mendocino County Sheriff’s Office said Wednesday.