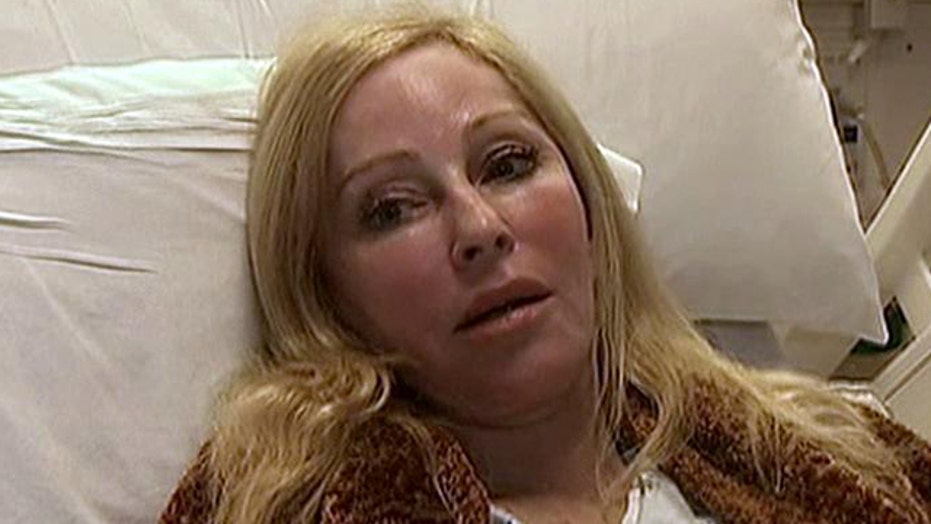 A victim in the Santa Monica shooting spree believes that if she hadn't laid as "still as she could" in her car and pretended to be dead to avoid the gunman's rampage, she would not be alive.

Fine was driving her car in Santa Monica when she saw the suspected gunman -- identified Sunday as 23-year-old John Zawahri-- wearing a Kevlar vest, carrying a rifle and standing in the road, motioning for another female driver to pull over.

“I first thought it was because he was trying to take traffic in a different direction because President Obama was in town,” she told Fox News in an exclusive interview from her hospital bed. “And then I saw that he actually had the rifle pulled up and pointed at her. So that’s when I realized it was quite a bit more than that.”

Fine then sped up and drove her car in between the suspect and the other driver and yelled “Don’t!”

At that point, Fine said the gunman turned his attention directly to her, with a “ferocious” and “incredibly frightening” gaze.

“The next thing I knew, glass was shattering on the passenger side,” Fine said.

Fine crashed her car after bullets grazed her shoulder and played dead, hoping to avoid the shooter.

Fine was then rushed to the hospital in an ambulance. She was released from medical care late Saturday, her husband Russell told Fox News.

“I feel so grateful I’m alive,” Fine said. “If I hadn’t ducked, and just laid down there, I don’t think I probably would have made it.”

Shortly after Fine’s run-in with the shooter, neighbors watched in shock as his father’s house went up in flames.

The suspect managed to carjack a woman’s vehicle, and ordered her to bring him to Santa Monica College. On the way to the school, he told her to stop along the way to shoot at a city bus and people on the street. Two people on the bus were injured.

Police had received multiple 911 calls by the time the mayhem shifted to Santa Monica College, a two-year school with about 34,000 students located more than a mile inland from the city's famous pier, promenade and expansive, sandy beaches.

On campus, he opened fired on a Ford Explorer, killing the driver, 68-year-old Carlos Navarro Franco, who plowed through a brick wall into a faculty parking lot.

Franco's daughter Marcela, 26, was also in the car and was shot. She died from her wounds Sunday at Ronald Reagan UCLA Medical Center, Santa Monica College officials said.

Joe Orcutt said he heard gunshots Friday and went to see what happened in the parking lot. He said he saw the Explorer in the brick wall and was looking for the shooter when, suddenly, there he was 30 feet away firing at people like it was target practice.

The gunman then moved on foot across campus, firing away. Students were seen leaping out windows of a classroom building and running for their lives. Others locked themselves behind doors or bolted out emergency exits.

At some point, he dropped an Adidas duffel bag loaded with ammunition magazines, boxes of bullets and a .44 revolver. Police also found a small cache of ammunition in a room in the burned-out house.

Trena Johnson, who works in the dean's office, heard gunshots and looked out the window and saw a man shoot a woman in the head outside the library.

Surveillance photos showed the gunman in black strolling past a cart of books into the library with an assault-style rifle by his side.

Vincent Zhang, an economics major, was studying in the library when he heard a female scream, "No, no. Please no."

Zhang ran out of the emergency exit while others took cover in what Seabrooks called a "safe room," barricaded behind a door.

"They stacked items found in the safe room against the door, hunkered down and avoided shots fired through the drywall at them while they were in that room," she said.

The shooter fired at least 70 rounds in the library. Miraculously, no one was injured until two Santa Monica police officers and a campus cop arrived and took out the shooter.

The gunman was enrolled at Santa Monica College in 2010, Seabrooks said.

Investigators are now trying to determine a motive behind the shooting spree.

Authorities are looking at family connections to find a motive because the killer's father and brother were the first victims, an official briefed on the probe who requested anonymity because he wasn't authorized to speak publicly told The Associated Press.

The killer, who died a day shy of his 24th birthday, was connected to the home that went up in flames after the first shootings, said Police Chief Jacqueline Seabrooks. She refused to elaborate or name the suspect because a surviving family member was out of the country and couldn't immediately be notified.

Standing next to the weapons and ammo found at multiple crime scenes, Seabrooks said at a Saturday news conference that the "cowardly murderer" planned the attack and was capable of firing 1,300 rounds.

"Any time someone puts on a vest, of some sort, comes out with a bag full of loaded magazines, has an extra receiver, has a handgun and has a semi-automatic rifle, carjacks folks, goes to a college, kills more people and has to be neutralized at the hands of the police, I would say that that's premeditated," she said.

The killer had a run-in with police seven years ago, but Seabrooks wouldn't offer more details because he was a juvenile at the time.

His father, Samir Zawahri, 55, brought his family to the neighborhood of small homes and apartment buildings tucked up against Interstate 10 in the mid-1990s, according to property records.

Not long after arriving on Yorkshire Avenue, the couple went through a difficult divorce and split custody of their two boys, said Thomas O'Rourke, a neighbor.

"It was not an easy breakup," O'Rourke said. "It was a bitter divorce."

When the sons got older, one went to live with his mother while the other stayed with the father.

"The father was a very nice gentleman," O'Rourke said. "But the boys just kind of kept to themselves. Didn't really socialize with any of the neighbors."

SWAT team officers searched the mother's Los Angeles apartment Friday night and officers interviewed neighbors about the son who lived with her, said Beverly Meadows, who lives in the adjoining unit.

Public records show that Meadows' neighbor is Randa Abdou, 54, the ex-wife of Zawahri and former co-owner of the house where the first shooting took place.

The mother was out of the country visiting relatives and wasn't expected home for another week, Meadows said. It wasn't clear if the son who lived with Abdou was a victim or the suspected gunman.

Fox News' Jen Girdon and the Associated Press contributed to this report.