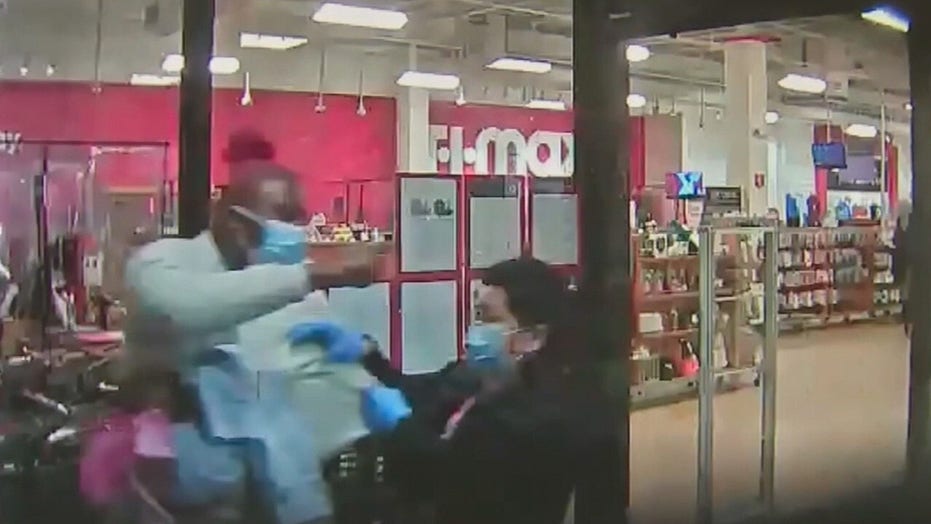 Police say a woman stole almost three thousand dollars worth of merchandise from the TJ Maxx in Newton, Mass., then walked out.

Police in Massachusetts are looking for a woman they say stole almost three thousand dollars worth of merchandise from a TJ Maxx, and then pepper sprayed a store employee who tried stopping her.

"We had somebody walk into the store, look around, took a hoodie, took a couple purses and proceeded out the door," Lt. Bruce Apotheker told Boston 25 News.

The retail employee was sprayed right in the face.

"When someone uses force and violence, uses the chemical spray, then it becomes a robbery," Lt. Apotheker said. He added that police never recommend retail employees go after shoplifters.

Police are not only hoping someone recognizes the robbery suspect but also her accomplice. Investigators say the two women entered the store together.

The suspect, shown on the surveillance video wearing a sweatshirt, was the one who grabbed a hoodie before asking to see a purse locked behind the counter. The suspect then asked to see a second purse, but when told she could only look at one at a time, she grabbed both Balenciaga bags and walked out.

This incident is the third involving pepper spray at a Boston-area business since Feb. 7th, Boston 25 News reports.

"Early February we had two people walking to CVS items one person filled a red basket full of items and proceeded out the door," Apotheker said. A worker at the CVS in that instance also attempted to stop the person when they were pepper sprayed.

Police do not believe the CVS and TJ Maxx incidents are related.

Boston police are searching for two people accused of assault while using pepper spray at a business Monday afternoon, as well.

Police found the TJ Maxx employee who had been pepper sprayed with a red face and eyes that were swollen shut. She was taken to the hospital for treatment.