New York City subway crimes skyrocketed by more than 200% this past week compared to the same time in 2021, after several reports of heinous attacks in the transit system and despite Mayor Eric Adams’s crackdown efforts.

There were 55 subway crimes reported from Feb. 21 through Sunday, Feb. 27, compared to the 18 during the same time in 2021 – a 205.6% jump, according to New York Police Department (NYPD) statistics released Wednesday. Subway crimes statistics also increased 72.4% for the most recent 28-day period, and 72.8% year-to-date compared to the same time last year, the data show. 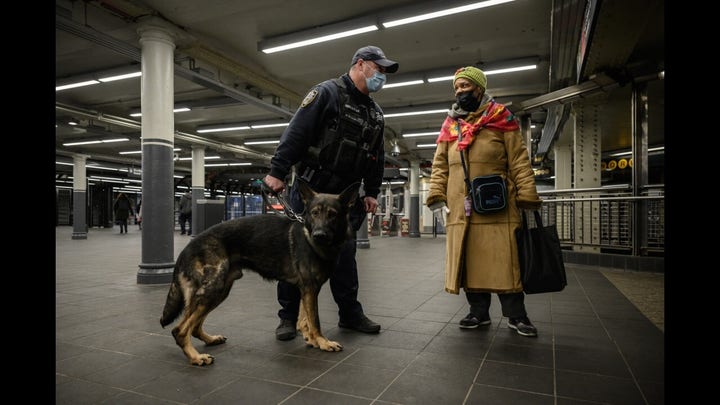 Hate crimes reports have also skyrocketed, with the week’s statistics showing a 200% increase year-over-year. Meanwhile, numbers for shootings, shooting victims and murders were down, statistics show.

Total index crime – meaning crime that falls under the NYPD’s seven major offenses – was up 47.7% year-to-date, the department found.

Joseph Giacalone, a crime data expert and adjunct professor for the John Jay College of Criminal Justice, noted that the subway crime uptick comes at a time when New York City is "trying to get back on its feet" after "the two big C’s" – COVID and crime.

"If you're thinking that people are going to be willing to come back after COVID, maybe," said Giacalone, a retired member of the NYPD. "But now you're dealing with a crime issue – specifically in the subway, which is the lifeblood of New York City – if people fear going into the subways. And right now, when you look at these numbers, there is some reason to be hesitant."

The rampant subway crime is a far cry from Mayor Adams’s enforcement plan, which took effect on Feb. 21 with efforts to revamp the transit system’s safety and security practices.

"We hear it all the time," Adams said when he announced the plan. "I hear it every time I’m on the subway system – people tell me about their fear of using the system, and we’re going to ensure that fear is not New York’s reality."

But violence and crime persisted.

On the day of the program’s launch, at least two people were assaulted in the subway system.

In one instance, a 42-year-old man was standing on the platform inside a Brooklyn subway station when he spotted a stranger looking at him and asked him why he was staring, the NYPD said. The suspect took a hatchet from out of his jacket and charged at the man, swinging the weapon at him in the process, police said.

The suspect was allegedly found to also have been carrying a screwdriver and a punch dagger, police said.

And just over two hours later, a woman was riding a southbound No. 4 train through the Bronx with a friend around 2:40 a.m. when an apparently homeless man ordered them to stop talking. They continued chatting, at which point he hit the woman in the face with a "small metal pipe," police said.

On Monday, a 43-year-old woman was sitting on a bench inside a Bronx subway station when a stranger approached and "struck her in the face and the back of the head with human feces," the NYPD said.

Chilling video of the attack shows the man standing behind the woman as he continues to strike her in the head before walking away.

Police arrested the suspect, whom they identified as 37-year-old Frank Abrokwa, just over a week later and charged him with forcible touching, menacing disorderly conduct and harassment.

And on Thursday, a 57-year-old research scientist for the New York City Health Department was on her way home when she was viciously attacked while entering a Queens subway station, police said. Dr. Nina Rothschild suffered a fractured skull and a brain bleed when her attacker, 57-year-old William Blount, struck her repeatedly over the head with a hammer, police said.

The weekend was no different. A man was shot in the chest during an argument on a Brooklyn subway station around 10:10 p.m. Sunday, police said. He was rushed to an area hospital, and was expected to survive.

Crime has continued to carry over into this week, with three teenagers and a man stabbed Tuesday, possibly during a fight, in a different Brooklyn subway station.