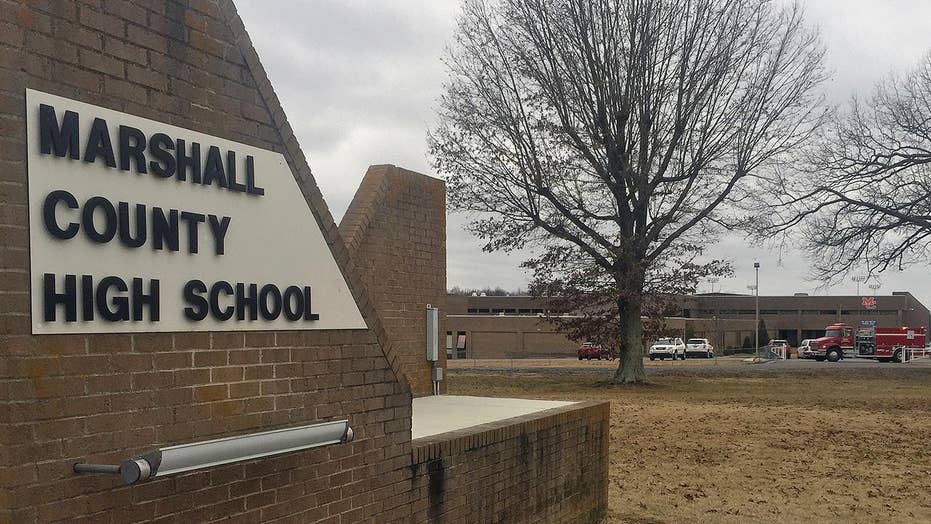 One of the reporters who raced to a Kentucky high school on Tuesday after reports that shots had been fired was likely not prepared for what she found out at the scene.

The suspect, a 15-year-old boy, was her son, the Louisville Courier-Journal reported.

Police appear to be leading a male from the Marshall County High School Tuesday, Jan. 23, 2018. (AP)

The shooting in Benton, which left two students dead and 21 injured, rocked the close-knit community of about 4,500 in southwestern Kentucky.

The mother and other family members declined to comment, the report said.

Authorities have still not announced the suspect's motive.

As school shootings become more commonplace, debates are raging in Kentucky and state legislatures nationwide about how to prevent them.

Kentucky Gov. Matt Bevin, a Republican and social conservative, has made it clear that he won't sign laws that restrict guns.

Bevin instead called on Americans to "wake up," recognize that school shootings are a "cultural problem,” and to look at the “root causes.”

"Our culture is crumbling from within," he said.

Bevin said the desensitization to death and killing is coming at an "extraordinary price."

Just hours after the shooting, his Republican colleague, state Sen. Steve West, rushed to file a bill to put more guns in schools.

Marshals wouldn't have to be police officers, but school district employees in good standing who have a license to carry concealed weapons.

West's bill is one of at least two in the state that would allow more guns into Kentucky's public schools and college campuses. They reflect a sentiment that has found bipartisan support.

"We need armed officers in every school in Kentucky. That is a small price to pay if it saves one child's life," state Sen. Ray Jones, a Democrat, said.

In the conservative state where politicians routinely pose in ads with guns, the National Rifle Association has an outsized influence in many state elections and the resulting gun policy debates in those legislatures.

Some Democrats, however, believe the push for more guns is misplaced.

The tragedy at Marshall County High School comes one day after a school shooting in Texas. (AP)

Democratic Rep. Attica Scott from Louisville said she is "definitely an advocate for gun safety and to me more guns is not the answer to gun violence."

Scott has filed legislation that would ban those convicted of hate crimes from carrying a gun and let local governments pass laws requiring gun sellers to use "responsible business practices."

"We are sending prayers and thoughts to kids who are clinging to the last bit of faith they have in the system of government that is supposed to keep them safe."

Meanwhile, Democratic Rep. Jim Wayne of Louisville has filed a bill that would make it a crime for adults to "recklessly" store a gun without a trigger lock, a measure aimed at preventing children and teenagers from obtaining access to their parents' guns.