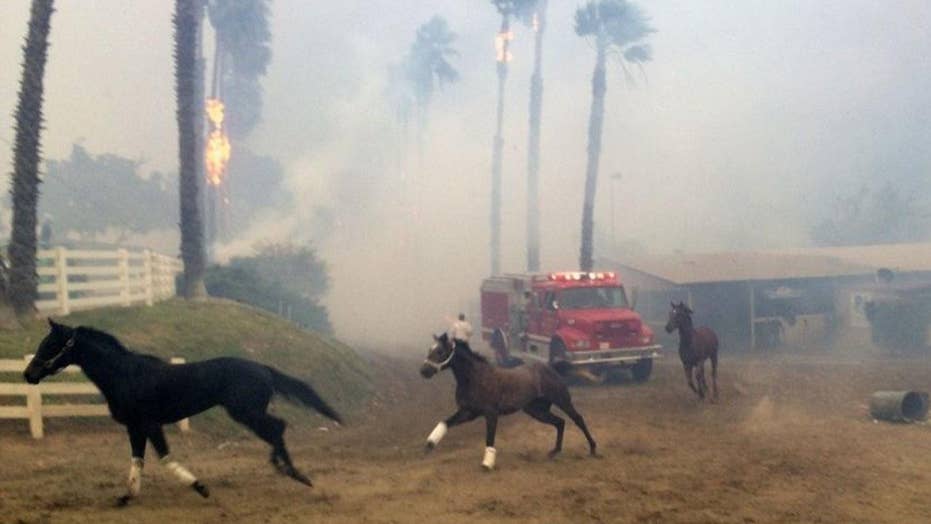 Ranchers race to save horses from wildfires in California

Will Carr reports on the devastation in Ventura, CA.

Hundreds of elite racing horses stabled at San Luis Rey Downs in San Diego County were set free Thursday in hopes that they would escape the flames as one of the major California wildfires consumed the training facility.

Trainers estimate at least a dozen of the thoroughbreds worth hundreds of thousands of dollars have died.

The training facility is known for stabling high-caliber horses that compete at Del Mar, Santa Anita and other top-flight California tracks. A sign outside the complex reads “Home of Azeri,” a reference to the former racing mare who was named the 2002 Horse of the Year and earned over $4 million in her career.

Mac McBride, who was working with the center’s trainers, said it was “total pandemonium when several hundred horses were cut loose,” but he believes most of the horses survived.

Some of the 450 horses stabled at the training facility located near Bonsall, just a few miles from where the fire broke out, were moved to a nearby track.

"There was so much smoke it was difficult to see," said horse trainer Dan Durham, who got his 20 horses rounded up and was loading them into vans to be evacuated. "Some of the horses were turned loose so they could be safe. They were scattered around."

"There was so much smoke it was difficult to see. Some of the horses were turned loose so they could be safe. They were scattered around."

Several trainers said some of their horses were killed at the facility.

"It was dark, everything was hot and she wouldn't come out. I opened the pen and tried to get behind her and get her out, and she wouldn't get out," horse trainer Cliff Sise told San Diego's KFMB-TV. "She burned to death that quick."