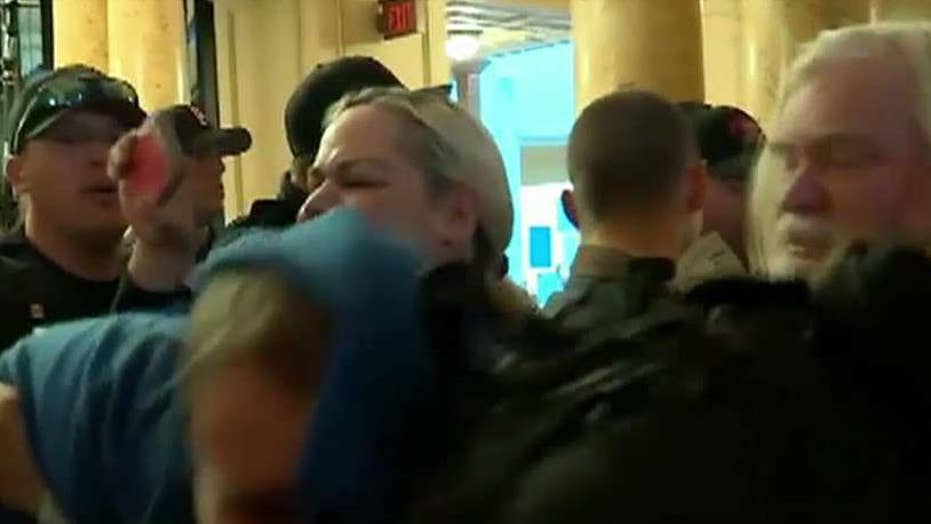 Officers hurts by thrown objects, were forced to use pepper spray

Police used pepper spray and arrested 10 people as demonstrators stormed City Hall in Portland, Oregon, Wednesday trying to stop the City Council from voting on a new police contract that includes more pay for officers and raised questions about the future use of body cameras.

Police said Wednesday evening they had arrested nine people but later revised that number to 10.

The demonstration forced Mayor Charlie Hales to stop the meeting, but city commissioners soon reconvened in a secure, third-floor room to vote while protesters from Black Lives Matter and Don't Shoot Portland were kept below.

Amid chants and shouts from below, the commissioners voted 3-1 in favor of the new contract, setting off another round of protests that briefly blocked public transit in the downtown core.

Protesters threw object at officers both inside and outside City Hall, the Portland Police Bureau said in a statement.

Protesters dispersed as darkness fell, but organizers said a demonstration was planned for Friday.

Hales' decision to move the meeting was unprecedented in recent city history, The Oregonian/OregonLive reported. The vote was streamed live on the city's home page.

Police eventually forced the protesters out of City Hall and into the streets.

Several were hit by pepper spray as officers cleared the doors.

Hales, the outgoing mayor, said the contract was "good for Portland."

Protesters were angry that Hales was bringing the matter to a vote now instead of letting his successor, Mayor-Elect Ted Wheeler, take up the issue in January so there would be more time for public input.

Police watchdog groups grew concerned earlier this month when an initial version of the contract guaranteed officers the right to view body camera footage before writing up any non-fatal encounters with civilians.

That language led to several smaller protests and sit-ins in the weeks leading up to Wednesday's vote.

Commissioner Nick Fish told KATU-TV in a live interview Wednesday that the contract did not include any language on body camera policy.

"It was carved out and will be discussed with the community later," Fish told the station.

By the end of the month, the 880-member Portland Police Bureau will have nearly 90 vacancies due to retirements and another 385 officers are projected to retire in the next five years.

Better pay will help the city entice new hires and could deter current officers from leaving to work elsewhere, he said.

Marshman also said any policies developed around body cameras will include public input.