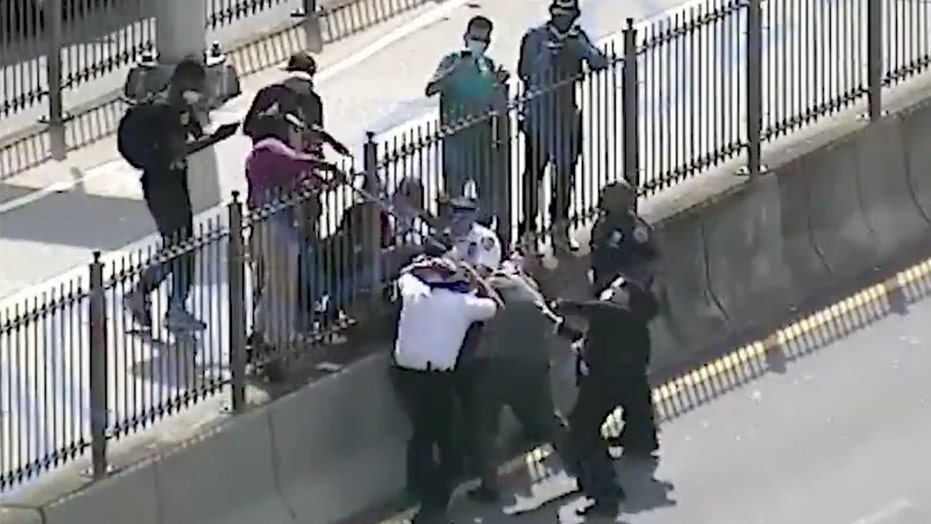 A protester assaulted a group of New York Police Department (NYPD) cops, including the highest-ranking uniformed member of the department, on Wednesday during a demonstration on the Brooklyn Bridge, according to police and footage of the attack.

The NYPD announced in a tweet around 12:30 p.m. that at least three officers were hurt by someone swinging a long object at the officers while they were placing someone under arrest on the opposite side of one of the bridge’s fences.

A police department spokesperson said the Chief of Department, Terence Monahan, is the other white-shirt member of the department seen in the video with the group at the time of the attack and suffered a non-life-threatening hand injury.

WARNING: THESE PHOTOS ARE GRAPHIC IN NATURE

The video shows someone from the group along the bridge approaching the edge of the fence, leaning over and whacking the officers huddled against the barrier.

After the first melee, another chaotic brawl occurred between more protesters and police near the where the first one happened.

NYPD, UNION OFFERING UP TO $23G FOR INFORMATION IN TODDLER'S MURDER

Monahan was one of the NYPD members lauded for taking a knee with protesters during a Jun 1 demonstration in the city.

It was not immediately clear if the video showed the only incident of violence or if others had occurred off-camera.