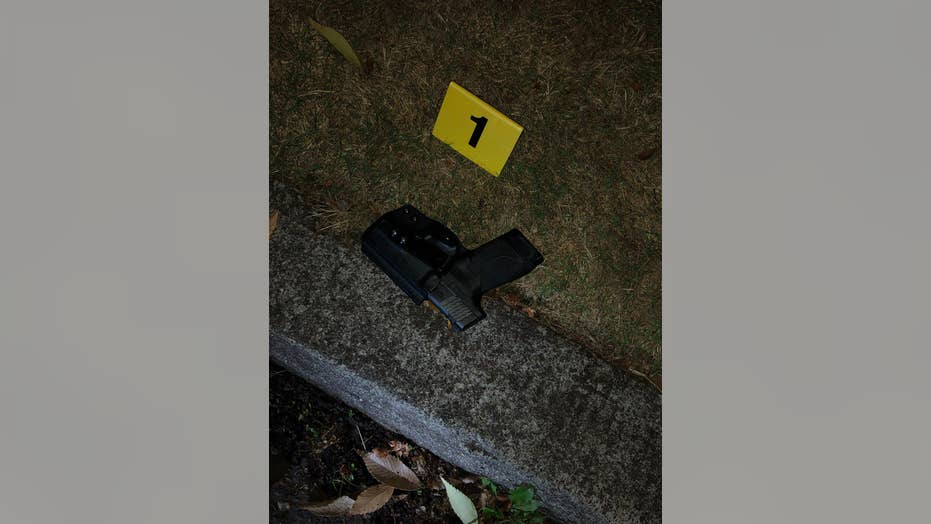 A shooting broke out late Tuesday after a second consecutive nightly demonstration at a Southeast Portland building, on the same night that police arrested at least three people on charges including trespassing.

A crowd of roughly 75 people left a park around 10 p.m. before marching on the Penumbra Kelly Building, which was the site of previous protests this year. The mass gathering blocked a nearby street in both directions, officials said.

Two unnamed people who had left the protest later got into a scuffle a few blocks away, before one of the pair shot the other, police said. Paramedics rushed both to the hospital; injuries were described as serious but not life-threatening.

The shooting involved two people who had been protesting in Portland, investigators said. (Portland Police Bureau)

It was unclear what sparked the gunfire, which also struck a nearby business, according to investigators.

Police said they had respected the crowd's right to protest but warned them not to enter or remain on "the property, its landscaping or walkways." The regular demonstrations had resumed after a brief hiatus due to wildfire smoke.

"Failure to adhere to this order may subject you to arrest, citation, or the use of crowd control agents including, but not limited to, impact weapons and/or OC munitions," Portland police wrote on Twitter.

Some members of the group would go onto the property of the building around 12:18 a.m. and were arrested, according to a news release by the Portland Police Bureau.

They were identified as Laura Sutton, 33, of Flagstaff, Ariz., Tracy Lynn Molina, 47, of Logsden, Ore., and Simona Arteaga, 39, of Portland. The trio was booked into the Multnomah County Detention Center on various charges, which included interfering with a peace officer.

Police said the crowd "mostly dispersed into the neighborhood" by 1 a.m.

Earlier in the night, at least one activist speaking to a crowd in front of the building would criticize a Monday report by the New York Times that said some protesters were using a more confrontational approach, which could force a schism among some Black Lives Matter activists.

“We don’t need allies anymore,” Stephen Green, an investor and entrepreneur in Portland who is Black, told the paper. “We need accomplices.”

The protester read parts of the article aloud to the crowd, which appeared to laugh at times.

"So this is what they do right, so not only do they get a brother who agrees with what they say, but they get another brother to argue with that first brother and they blast that out," the demonstrator told the crowd before reading the comment by Green. "So what they're showing is Black people not being able to get along."

After more joined the crowd, police would issue the use of force warning before the article was read aloud once again. Meanwhile, a firework was thrown in front of police vehicles in the area, according to Oregon Public Broadcasting reporter, Sergio Olmos. Some people were also captured on video dancing to songs by Miley Cyrus and Rage Against the Machine.

On Monday, a crowd marched on the Penumbra Kelly Building and stayed off of the property, but some individuals threw various items into the parking lot after congregating near the entrance, Portland police said earlier on Tuesday.

Arson investigators and the Explosive Disposal Unit identified one of the items thrown as a "viable Molotov cocktail," according to authorities.

"The wick was lit and the device was thrown onto the property," police added. "Fortunately, the fire extinguished and no one was injured."

Protests in Portland resumed late last week, after more than 100 consecutive days of demonstrations in the city.