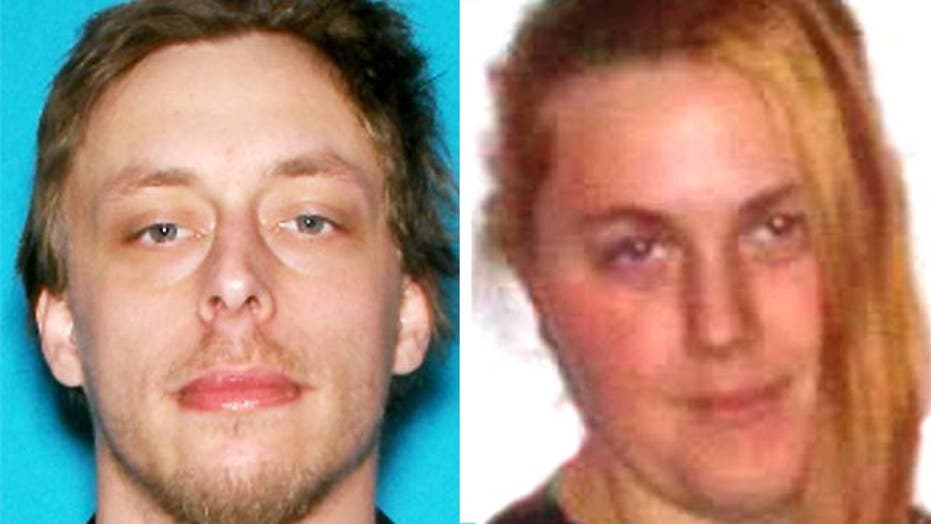 The pair who fatally shot two Las Vegas police officers and one civilian before taking their own lives Sunday have “some apparent ideology that is along the lines of militia and white supremacists,” according to authorities.

Las Vegas Metropolitan Police Assistant Sheriff Kevin McMahill said at a press conference Monday that one of the suspects, 31-year-old Jerad Miller, left a swastika and a Gadsden flag -- which features a coiled snake with the words "Don't Tread on Me” -- on top of the body of Officer Alyn Beck, 41.

Jerad Miller also laid a note on the body of officer Igor Soldo, 31, that said “this is the beginning of the revolution,” McMahill said. Both officers were gunned down inside Cici’s Pizza Sunday during their lunch break.

Authorities say Miller and his wife, Amanda, 22, acted alone in the shootings and they are not seeking additional suspects. McMahill added that officers are still looking for a motive and the couple believed that law enforcement was the "oppressor."

The couple had visited Cliven Bundy's ranch during an armed standoff earlier this year with federal authorities about a land dispute, Bundy's son said Monday. Ammon Bundy told The Associated Press that they were asked to leave his father's ranch after being there for a few days this spring.

He said that while details were still sketchy, the Millers' conduct was the problem. He called the couple "very radical" and said they did not "align themselves" with the protest's main issues.

Meanwhile, the Las Vegas Review-Journal reported late Sunday that officers were searching a small apartment complex about four miles from the restaurant.

A law enforcement official close to the investigation told the Las Vegas Review-Journal that the suspects were new to the area. The paper reported that investigators found swastika symbols during their search of the suspects' apartment.

Neighbor Krista Koch described the couple as "militant," saying they talked about planning to kill police officers, as well as "going underground" and not coming out until the time was right.

Another neighbor, Brandon Monroe, said the man who lived in the apartment often talked about conspiracy theories and often dressed in camouflage or as Peter Pan to work as a street performer. Monroe added that he thought the couple used methamphetamine.

Monroe, according to another neighbor, Jessica Anderson, was told by the gunman that he was kicked off Cliven Bundy's ranch in Nevada while protestors gathered there during the Bureau of Land Management's roundup of Bundy's cattle.

The rancher's wife, Carol Bundy, told FoxNews.com that no one was kicked out because of their beliefs.

"Our communication at the time was that everyone was welcome, and no one was asked to leave," Carol Bundy told FoxNews.com earlier Monday. "There was no one here who advocated anything like [white supremacy or killing police]."

The Millers moved to the Las Vegas area in January, police said. Amanda Miller had worked at a Hobby Lobby craft store in Las Vegas, the chain store said in a written statement, but was no longer employed there.

Jerad Miller was convicted of felony vehicle theft in Washington state, police said. He also had a criminal record in Indiana.

Miller and his wife were married in August 2012, according to a marriage license on file in Indiana.

Police were called to the Cici’s Pizza restaurant, about five miles northeast of the Las Vegas Strip, at 11:22 a.m. local time Sunday, shortly after the shooting spree began.

According to McMahill, Miller first entered the restaurant and walked around briefly before heading back out to the parking lot to meet his wife.

The pair then went back into Cici’s Pizza and walked towards the booth where Soldo and Beck were eating.

Jerad Miller pulled out a handgun and put it up to the back of Soldo’s head and blasted him once, killing Soldo instantly, and then shot Beck in the neck, McMahill said.

Beck reacted to the gunfire and was shot multiple times by Amanda Miller, who pulled a handgun out of her purse, McMahill added.

Sheriff Doug Gillespie said Beck was able to fire back at the suspects. Both officers were later pronounced dead at University Medical Center.

The duo then left the restaurant and walked over to a nearby Walmart, where Jerad Miller fired a shot into the air and told people to get out, shouting that it was “a revolution,” McMahill said.

Bystander Joseph Robert Wilcox, 31, who was carrying a concealed weapon inside the store, spotted Jerad Miller and told a friend he would confront him, according to authorities. As he neared Jerad, he was shot in the ribs by Amanda and later died, McMahill said.

The couple then exchanged gunfire with officers in the back of the store and killed themselves in an apparent suicide pact, Las Vegas Police spokesman Larry Hadfield said.

McMahill said Amanda fired several rounds into Jerad then took her own life with a single shot to the head.

Gillespie said the events mark a “tragic” and “very difficult” day for the department, but his staff is determined to continue serving the community.

“We will be out there doing it with our heads held high but with emptiness in our hearts,” he said.

Soldo was described as a good father and a "great guy" by his sister-in-law, Colleen Soldo of Beatrice, Nebraska. She said he attended high school in Lincoln, Nebraska, and previously worked as a corrections officer.

Walmart issued a statement saying it's working with police on the investigation. Cici's Pizza said in a statement the company was deeply saddened by the shooting and would keep the location closed until further notice.

"We express our deepest condolences to everyone who has been affected by this senseless act of violence," Walmart spokesman Brooke Buchanan said.

Gov. Brian Sandoval said in a statement he was devastated by the murders of the two officers and an innocent bystander in an "act of senseless violence."