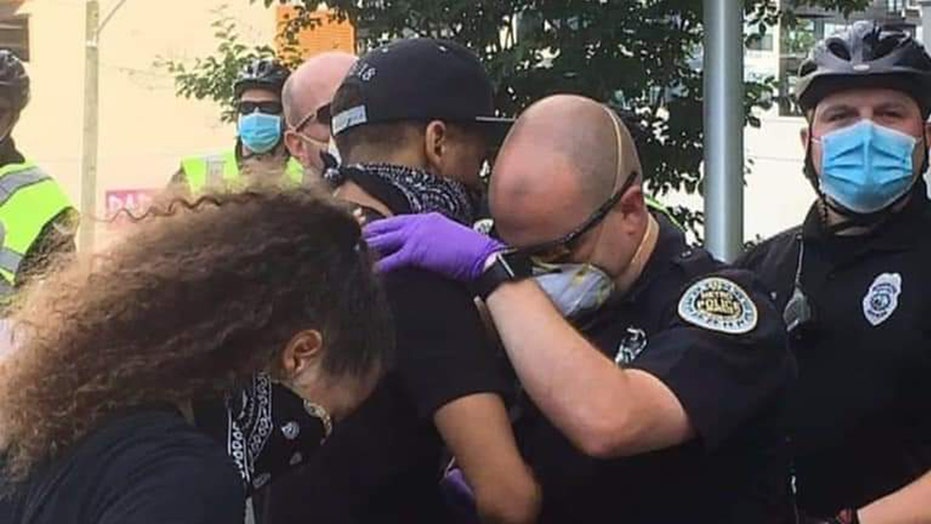 An image of hope in turbulent times shows a police officer praying with a protester in Tennessee.

It was captured on camera the same day violence broke out in Nashville, leaving at least 30 businesses and buildings damaged, FOX 17 reports.

Officer Garren Hoskins, tasked with protecting the Central Precinct, started talking with a peaceful protester who was preaching about their shared faith.

The officer asked him if he'd like to pray. The protester put down his sign and the two embraced and prayed.

"It was very touching," Hoskins told the media. "That gentleman was such a nice guy. I believe it created a solidarity there between him expressing his freedom of speech and me there as a police officer and that's something the world needs to see."

The officer noted that their embrace had an impact on others around them, especially after some rocks were thrown at them. FOX 17 reports that later in the day, 28 people were arrested downtown. Fires were set inside the Nashville historic courthouse and City Hall, and businesses and police cars were vandalized.

"You can see rioting and looting in all cities across the United States," Hoskins said. "But I think there are things happening outside of those images that are real and powerful, and my image happened to be caught at that time."

He didn't know the image was caught on camera until the department posted it, and it immediately went viral.

Hoskins concluded that the image shows a "peaceful solidarity" between law enforcement and society, showing there can be a "peaceful outcome" when both sides come together.

Though the two cordially wished each other well, the officer said he'd love to sit down, hang out and have a cup of coffee with the protester.