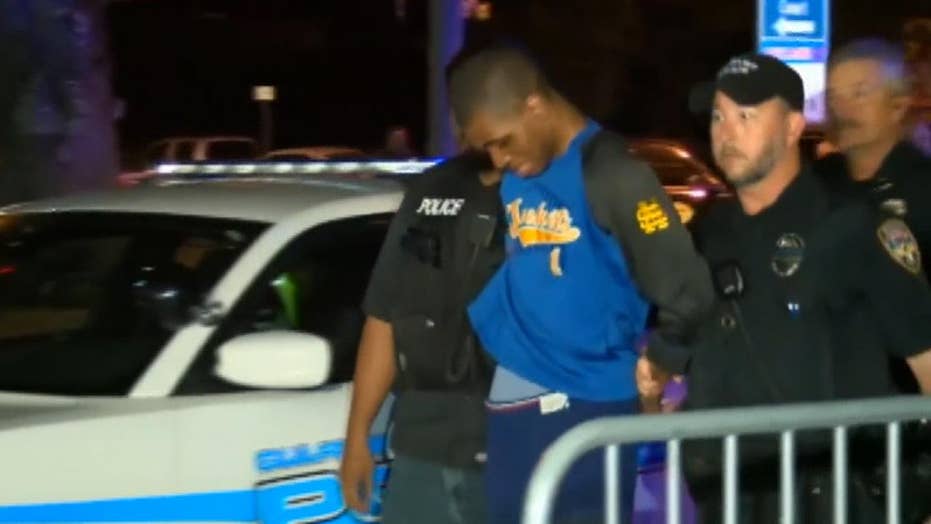 The 19-year-old accused in the brazen murder of a decorated, veteran cop flashed a smirk as he walked a gauntlet of law enforcement officials who'd gathered to watch him booked into the same Biloxi police station outside of which he's believed to have killed Robert McKeithen.

Atkinson was yanked out of a police cruiser to some clapping and cheering, but his emergence was mostly met by the dozens of officers who had gathered to witness the scene – including agents from the Border Patrol and FBI – silently staring him down as he was marched inside the building.

“These officers… some of them have been up for 38, 40, 44 hours,” Miller said. “We thought it would be fitting for them to be here and see the arrest that they worked so hard to try to make.”

He added: “I’m not bothered by his smile."

Investigators on Tuesday are still trying to determine why McKeithen – an Air Force veteran and recipient of the Medal of Valor for helping save the lives of special needs children during Hurricane Katrina – was targeted Sunday night, just months before his planned retirement.

McKeithen, who served the Biloxi Police Department for 24 years, was shot near his police car in the facility’s parking lot. He later died at a local hospital.

The suspect fled following the attack – sparking a frenzied manhunt in the Mississippi Gulf Coast city for much of Monday, involving SWAT teams and multiple law enforcement agencies at the federal, state and local levels.

A surveillance video had captured Atkinson wandering into police headquarters at some point prior to the attack, giving investigators a clear image of the man they were looking for. His identity was confirmed through tips and interviews, Gulfport police Spokesman Sgt. James Griffin told the Associated Press.

But Atkinson remained elusive -- until an eagle-eyed Biloxi officer spotted him by chance as he drove home after ending his shift, Miller said.

The officer, who was driving through Wiggins, about 30 miles outside of Biloxi, spotted a man walking on the side of the road who looked like Atkinson.

Miller said the officer called Wiggins police, who responded to the scene and arrested the man – who turned out to be him.

Miller told reporters Monday that Atkinson is now facing a capital murder charge and at least one other person will be charged with accessory for helping him flee Biloxi.

“We want to make sure that we have a solid case,” Miller said. “We want the district attorney to be pleased with the case that we present. And we want this guy to pay for what he has done.”

Miller also said the department feels “vindicated” after a “long couple of days” surrounding the death of McKeithen. He hailed the community for their support, noting that residents have sent them cards and brought food down to the police station for officers working on the case.

The slain officer’s cruiser is still parked outside of the Biloxi Police Department headquarters and has turned into a makeshift memorial. Its hood by Monday afternoon was completely covered with flowers, balloons and American flags.

“There are no words that are going to make this better for them,” Miller said when asked if he had a message for McKeithen’s family. He leaves behind a wife, daughter, two stepsons and a stepdaughter.

“I hope in some small way making this arrest tonight will bring them some closure. But there is no words,” he added. “I’ve talked to Mrs. McKeithen several times – there is no words to make her feel better.”

McKeithen’s funeral will be held at a local church on Monday, May 13.