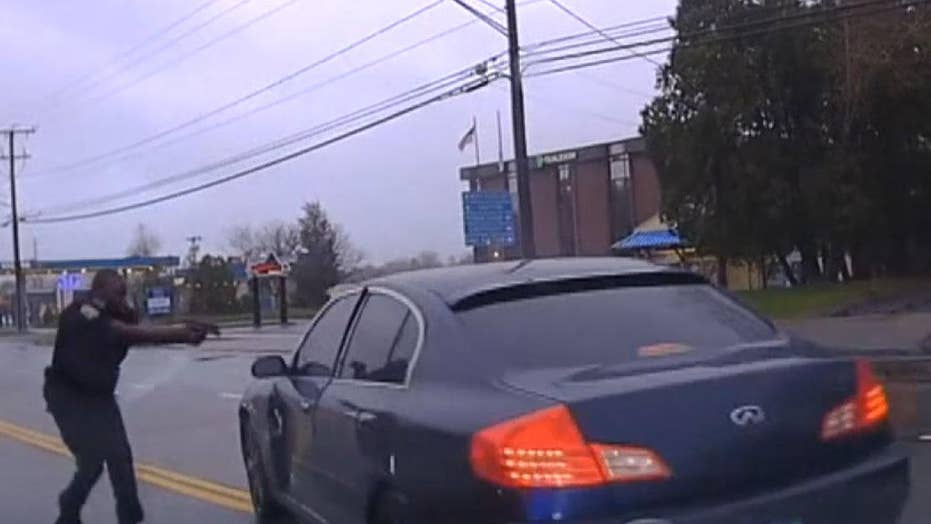 Raw video: Officials release dashcam footage of the officer-involved shooting of Jose Vega Cruz after his death sparked protests from the community.

A set of videos released Friday shows the moment a Connecticut police officer opened fire at an 18-year-old who drove at him after an attempted traffic stop and chase last month that sparked protests by family members and activists.

The police dashcam and surveillance videos show Wethersfield Officer Layau Eulizier shooting through the front windshield of a car being driven at him by Anthony Jose Vega Cruz during an attempted traffic stop on April 20.

Eulizier had run in front of the car, yelling "show me your hands" several times and fired two shots through the windshield of the vehicle when the teenager drove at him.

Eulizier and another officer were trying to pull over Cruz, whose nickname was Chulo, because the license plates on the car were not registered to that vehicle, officials said. The dashcam video released Friday shows another officer, Peter Salvatore, pull Cruz over shortly before the shooting. Cruz and his 18-year-old girlfriend cannot be seen through the tinted driver and passenger windows.

This sequential combination of images from police dash camera shows, from top left, Police Officer Layau Eulizier pointing his weapon at a car being driven at him by Anthony Jose Vega Cruz during an attempted traffic stop on April 20 in Wethersfield, Conn. (Hartford State's Attorney via AP)

As Salvatore approaches the car on foot, Vega Cruz drives off before he loses control about 10 seconds later when Eulizier, driving from the opposite direction, tries to stop him.

After sliding across the road and skidding 180 degrees, Eulizier rams the vehicle head-on with his SUV cruiser. Cruz then put the car in reverse as Eulizier got out of his cruiser and yelled "show me your hands." As Vega Cruz backs into the street, Salvatore rams the car, and it comes to a stop.

Eulizier then runs in front of the car, still yelling, "show me your hands," before opening fire as the car comes at him. Cruz died 2 days later at a hospital, while his girlfriend was not injured.

Hartford State's Attorney Gail Hardy and Wethersfield officials said they released the videos in the interest of transparency while Hardy determines whether the shooting was justified. Hardy said the investigation is still in its "early stages," and did not know how long it will take to complete.

"Connecticut State Police continue to gather Wethersfield Police Department policies, evidence and to interview witnesses," Hardy said in a statement. "I reiterate that this will be a thorough and comprehensive investigation to allow me to determine whether the use of force resulting in the death of Anthony Vega Cruz was justified under the applicable law."

Wethersfield Officer Layau Eulizier and another officer were trying to pull over Anthony Jose Vega Cruz because the license plates on the car were not registered to that vehicle, according to officials. (Hartford State's Attorney via AP)

Wethersfield Mayor Amy Morrin Bello told FOX61 the videos showed "the dangers that our police are involved with every day."

"We've had a lot of public outcry for the video, and I think it is important for people to be able to see it themselves," she told the television station. "Otherwise there is a lot of misinformation that gets out there."

Surveillance video comes from the February 15 mass shooting at the Henry Pratt Company.

Cruz's family and activists, however, have questioned whether the use of deadly force was necessary and claim that the officer "acted recklessly" when he shot at the unarmed couple.

"We are devastated, enraged, and continue to demand justice for their son and brother," the lawyers for Cruz's family, Ben Crump and Michael Jefferson, said in a statement. "The officer must pay for his actions. We urge the State's Attorney to bring swift justice for this hurting family and criminally charge the officer who killed Chulo."

Eulizier was placed on paid leave, pending the investigation by state officials.