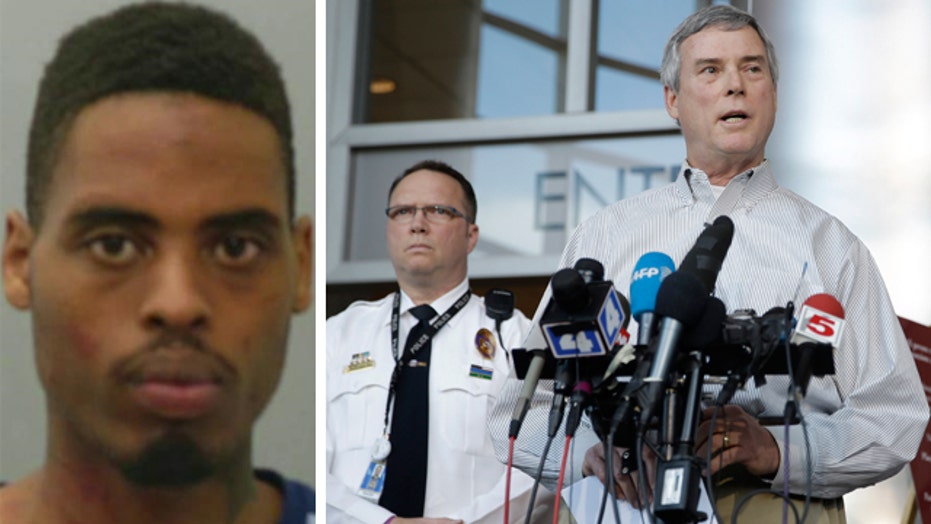 Arrest made in the shooting of two Ferguson PD officers

20-year-old Jeffrey Williams confessed to the crime, says he did not specifically target police

Jeffrey Williams was arrested Saturday night and is charged with two counts of assault in the first degree, three counts of armed criminal action and firing a weapon from a vehicle, St. Louis County Prosecuting Attorney Robert McCulloch said during the afternoon press conference.

McCulloch said Williams was “out there earlier that evening as part of the demonstration” and told police that he fired shots at someone he had a dispute with, and hit the officers, who he alleges were not his intended target.

"We're not sure we completely buy that part of it," McCulloch said, adding that there might have been other people in a vehicle Williams is accused of firing from.

But several activists who've been involved in the protests since the Aug. 9 fatal shooting of 18-year-old Michael Brown by a Ferguson police officer told The Associated Press they were not familiar with Williams.

Brittany Ferrell, 26, a protest leader with the group Millennial Activists United, had just left a meeting with other leaders Sunday when word of the arrest circulated. She said no one in the group knew Williams, and they checked with other frequent protesters — who also hadn't heard of him.

Ferrell suspected McCulloch tried to cast him as a protester to reflect negatively on the movement.

"This is a fear tactic," she said. "We are very tight-knit. We know each other by face if not by name, and we've never seen this person before."

McCulloch said Williams’ story of a dispute with another person -- including that he did not target the police -- is still part of the investigation, which is ongoing.

McCulloch said the .40-caliber handgun that matches the shell casings recovered at the scene of the officers’ shootings was found in Williams’ residence, which police searched after obtaining a warrant based on information received from the public.

Williams, who is being held on $300,000 cash bond, had a warrant out on him because he is on probation for receiving stolen property and has failed to appear to his parole officer for the past seven months, McCulloch said.

Williams is scheduled to appear in county court in Clayton Monday morning. St. Louis County police spokesman Brian Schellman said he didn't know whether Williams had an attorney or when he'd appear in court. A message left at the St. Louis County Justice Center was not immediately returned.

Tips from the public were key in leading police to Williams, and McCulloch urged anyone with information to contact local law enforcement with further information.

The officers -- a 41-year-old St. Louis County officer and a 32-year-old officer from Webster Groves -- were shot Thursday as protests were winding down following the resignation of Ferguson Police Chief Tom Jackson. Jackson was the sixth city official to leave office following a Justice Department review of the city's law enforcement practices.

Both wounded officers were released from the hospital Thursday, and St. Louis County Police Chief Jon Belmar -- who called the attack an ambush -- said they could have been killed. The St. Louis County officer was shot in the right shoulder, with the bullet exiting through his back. The officer from Webster Groves was shot in the right cheek, just below the eye. The bullet  became lodged behind his ear.

The shots were believed to come from a handgun across the street from the police department.

The gunman may have fired from up to 120 yards away, a distance longer than a football field. But with a line of roughly 20 officers standing in front of the building, the shooter did not have to be particularly accurate to hit two of them, Belmar said.

Belmar said Friday detectives were working around the clock to crack that case. The department's top priority, he said, was to continue "a tempo of service and protection and relationships" that ensure Ferguson does not "have a regression from all that we've done since last fall."

The gunfire drew instant, broad condemnation from activists. Dozens of protesters gathered again Thursday night in Ferguson, expressing sympathy for the wounded officers and praying for peace during a candlelight vigil.

"We cannot afford these kinds of incidents happening. That gets us absolutely nowhere," said St. Louis activist John Gaskin III. He called the gunfire "disgraceful and cowardly" and said people "need to be working for reforms and justice, not revenge."

Robinson said the wounding of the officers "definitely set us back." But he believes protesters can regain what they lost.

"Even last night as we protested, police were very gracious to us," he said Friday. "That shows a lot of trust to us."

"Although the work is not nearly done," he said, "this is a time for practitioners of democracy to pat themselves on the back for significant change."

Attorney General Eric Holder said in a statement Sunday that the arrest "sends a clear message that acts of violence against our law enforcement personnel will never be tolerated" and praised "significant cooperation between federal authorities and the St. Louis County Police Department."

President Obama condemned the shooting of the officers, saying that though the city's law enforcement practices were "oppressive and objectionable," there was "no excuse" for violence.

Obama made the remarks during a taped appearance on ABC's "Jimmy Kimmel Live" Thursday.

"We reject any kind of violence directed toward members of law enforcement," the statement read. "It cannot and will not be tolerated."

Ferguson Mayor James Knowles III and the City Council issued a joint statement saying they support "peaceful protesting" but "will not allow, nor tolerate, the destructive and violent actions of a few to disrupt our unifying actions."