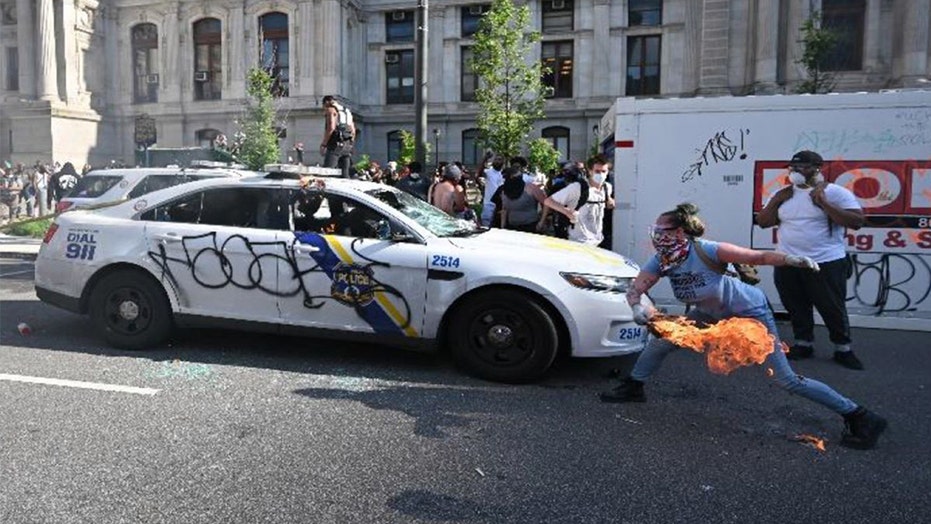 Senate Democrats are split on blocking the Republican police reform bill; reaction and analysis from Georgia Senator David Perdue on ‘The Daily Briefing.’

The Justice Department announced federal arson charges Wednesday against a 33-year-old Philadelphia woman accused of torching a pair of police vehicles during protests in the City of Brotherly Love.

Lore-Elisabeth Blumenthal allegedly appears on video taking a burning piece of wood from a police sedan and shoving it into a police SUV as both were parked near City Hall, according to U.S. Attorney William McSwain, of the Eastern District of Pennsylvania.

She is accused of setting fire to both vehicles during protests over the death of George Floyd on May 30. The arsons destroyed both of them, according to prosecutors.

“Torching a police car has nothing to do with peaceful protest or any legitimate message,” McSwain said in a statement. “Anybody who engaged in such acts can stand by to put your hands behind your back and head to federal prison. We are coming for you.”

Many of the nationwide protests against police brutality and systemic racism in recent weeks have been organized on social media. But those same platforms also provide opportunities for law enforcement to keep demonstrators under surveillance.

This image from social media contained in court filings appears to show a woman, whom the FBI has identified as Lore Elisabeth Blumenthal, throwing a flaming object at a police cruiser during protests outside City Hall of the death of George Floyd on May 30, 2020. (U.S. District Court for the Eastern District of Pennsylvania)

Court filings reportedly reveal that agents used Instagram, where photographers also captured shots of the masked protester. Next, they located the Etsy shop that sold the T-shirt the woman was wearing in the video. That brought them to to her LinkedIn page, to her profile on a fashion website, and eventually to her doorstep in Philadelphia.

Her lawyer raised concerns about the investigative tactics in an interview with the Philadelphia Inquirer.

“The question is whether they’ve undermined the privacy interests of everyone based on the search for one or two individuals,” Paul Hetznecker, her attorney, told the outlet. If convicted, Blumenthal could face a mandatory minimum of seven years in prison -- or a maximum of up to 80.

Civil rights advocates say the use of social media by investigators also raises questions about the scope of law enforcement surveillance of protest movements.

“Social media has fueled much of the protests, and has also become a fertile ground for government surveillance,” Hetznecker, who has organized a group of lawyers to represent demonstrators, including Blumenthal, told the Inquirer. “I think people have lost awareness of that.”

A protester holds a sign that reads "Abolish Police" during a "Silent March" against racial inequality and police brutality that was organized by Black Lives Matter Seattle-King County, Friday, June 12, 2020, in Seattle. (AP Photo/Ted S. Warren)

Demonstrations that were largely peaceful happened in hundreds of cities around the country after the death of Floyd, who died in police custody in Minneapolis on May 25. However, some of them led to looting and arson.

Authorities in Washington state announced last week that a 25-year-old Tacoma woman had been arrested in connection with the destruction of five police vehicles there, and suspected arsonists have also been busted in connection with a Molotov cocktail attack on a police precinct in Minneapolis and the burning of a police van in Chicago.

“There were individuals who chose to use the protests as an opportunity to engage in criminal activity,” Philadelphia Police Commissioner Danielle Outlaw said Wednesday. “Some of these individuals’ actions were malicious, destructive, and could have resulted in critical injuries to others.”