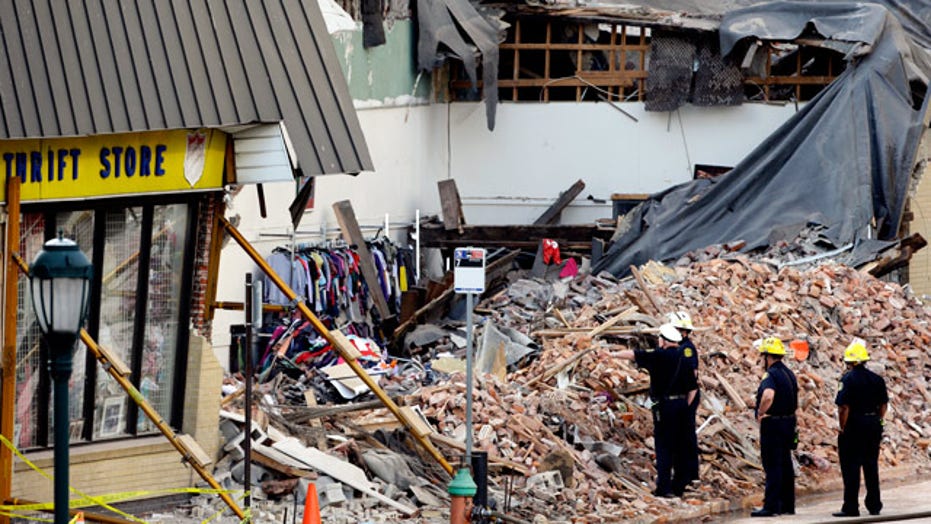 Myra Plekam was reported to be awake and talking to rescuers before she was placed in an ambulance and taken to a nearby hospital where she is listed in critical condition.

Fire crews continued their search and recovery operation through the night. There was activity on the pile Thursday morning. So far, 14 people were removed from the tons of debris.

Mayor Michael Nutter held a press conference on Thursday and said about 25 percent of the site was still being searched. He said there is now a large crane at the scene.

The mayor reiterated that they don't know exactly how many people were in the store, so they cannot say for certain that there are no more people trapped.

At least 13 other people were hospitalized at nearby trauma centers with minor injuries and listed in stable condition.

"It's dangerous environment for our members, our firefighters, our paramedics -- we're going to take our time," Fire Commissioner Lloyd Ayers said.

One witness, Marc Newell, told the Philadelphia Inquirer that he heard an "unbelievable rumble," "like a freight train."

"You could hear the moaning," he told the paper.

The collapse involved a Salvation Army corner thrift store and a four-story building next door with a sandwich shop on the first floor.

Officials said the demolition contractor was Griffin Campbell Construction in Philadelphia. Messages left for Campbell were not returned.

Records show that Campbell was charged in 2005 with dealing crack cocaine near a playground. The charges were dismissed after prosecutors misplaced evidence.

He pleaded guilty in an insurance fraud case in 2009, and was acquitted of aggravated assault and related offenses in 2007.

Campbell has also filed for bankruptcy protection twice since 2010. The first bankruptcy was dismissed because he didn't follow through on a repayment plan approved by the court. A second bankruptcy petition was filed in March.

There were no existing violations on the collapsed building, and Campbell had proper permits for the work being done, according to Carlton Williams, of the city's Department of Licenses and Inspections.

Messages left at the company's New York offices were not immediately returned.

The accident happened on the western edge of downtown, between the city's business district and its main train terminal, 30th Street Station. The block had long been a seedy link between gleaming skyscrapers and the busy area around the station.

The collapse involved an empty building that once housed a first-floor sandwich shop and apartments above. The thrift shop was on one side. The other side was an adult bookstore and theater that had been taken down within the last few months.

A demolition expert wondered what precautions were taken to protect the Salvation Army store, especially since it remained open. Stephen Estrin, a Florida contractor who has testified as an expert at several trials involving building collapses, also questioned whether the demolition was being done by hand or with machinery. A piece of equipment with a claw device was seen amid the debris Wednesday.

"This is an inner-city demolition of a masonry building, which would normally be done manually because of the inherent risk -- predictable if certain things are not done very slowly and very carefully -- of a collapse," Estrin said. "One of the problems with claw work is it sets up a vibration in the walls."

Records show the collapsed building was sold to STB in 1994 for $385,894. Plans tentatively called for the block to be redeveloped into retail stores and apartments.