A Philadelphia statue of Christopher Columbus will see the light of day once again, now that a plywood box covering the monument has been removed.

Fox station WTXF in Philadelphia reported on Monday that a commonwealth court ruling late last week allowed for a wood box painted with green, white, and red stripes to be removed from covering a statue of Columbus.

A statue of Christopher Columbus in Philadelphia was covered up for the last two years after violence broke over between those who protected the monument and those who wanted it to come down. Last week, a judge reversed an order to remove the statue, allowing for it to be uncovered once again. (FOX WTXF Philadelphia)

For centuries, Columbus was credited with discovering America, but throughout that course, the European pioneer was found to have treated indigenous people already on the land, poorly.

Things really came to a head in 2020, when the statue became a symbol of hate to some, and to others it was a symbol of important history.

The two groups clashed as those who supported the historical importance protected the statue from vandalism. The clash became violent, and people were arrested, according to WTXF.

The plywood box that covers a statue of Christopher Columbus in Philadelphia has been painted the colors of the Italian flag, as seen in the photo above taken on Oct. 7, 2022. (Charles Fox/The Philadelphia Inquirer via AP)

As a result of the unrest over the 146-year-old statue in South Philadelphia’s Marconi Plaza, the monument to Columbus was covered with a box.

Out of concerns for public safety, Mayor Jim Kenney ordered the statue be removed.

Although Columbus was celebrated as an explorer for centuries, Kenney said he had a "much more infamous" history of enslaving and punishing the indigenous people, including severing limbs and death.

Kenney’s decision to remove the statue was overturned by a judge who said city officials failed to prove the statue posed a threat to public safety.

The judge will also allow a clear structure to be built around the statue. 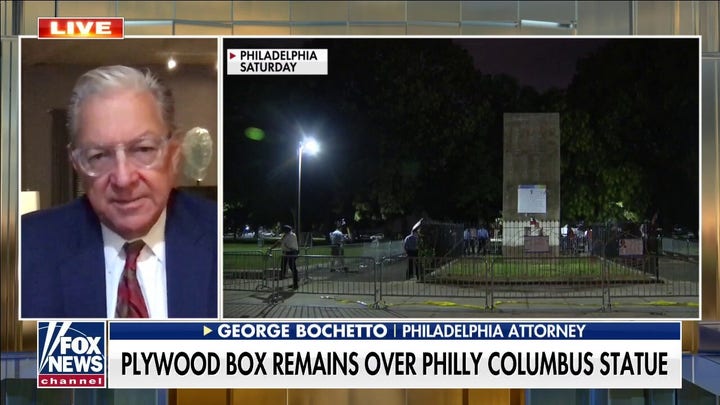