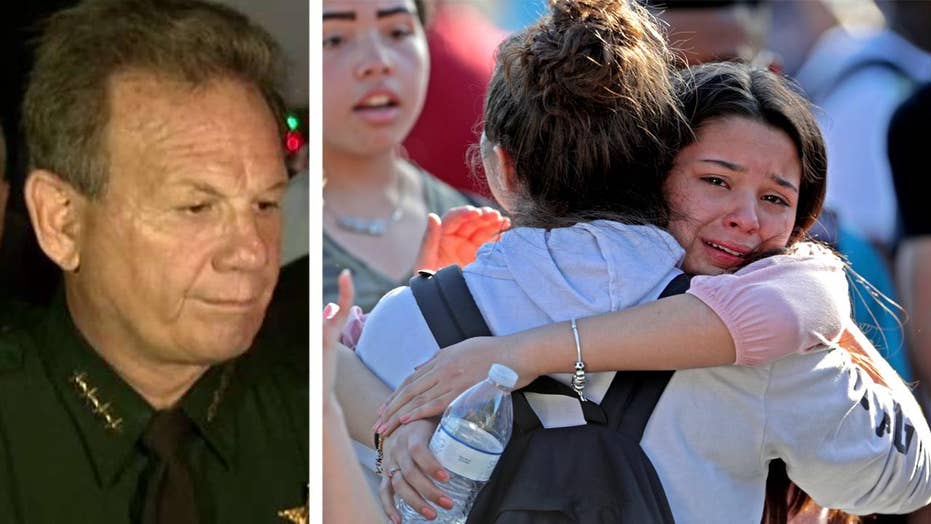 A shooting at a high school in Parkland, Florida, killed at least 17 people, stunning the town and much of the nation, as investigators raced to find a possible motive behind the bloodbath.

The suspect was identified as 19-year-old Nikolas Cruz, a former student at Marjory Stoneman Douglas High School who'd been expelled for disciplinary reasons, Broward County Sheriff Scott Israel confirmed during an evening news conference. Sen. Bill Nelson told Fox News that Cruz was wearing a gas mask and may have had smoke bombs during the rampage.

The school was under lockdown as police rushed to the scene during the afternoon.

Of the 17 people killed, 12 of them died in the school, two were killed outside, one died on the street and another two died at the hospital, Israel said. He added that 15 people were transported to the hospital.

The suspect carried an AR-15 rifle and had "countless magazines," the sheriff said.

According to CBS12, a Palm Beach County Sherriff's Department bomb squad was seen at a "mobile home park west of Lantana," which is 30 miles north of Parkland. Its reportedly connected to the high school shooting and authorities were "preparing to serve search warrant."

During an evening news conference, Israel said one of the deceased victims was a football coach at the high school although their name was not provided. Israel said a sheriff's deputy's son was also shot in the arm and was being treated for non-life threatening injuries.

"This is just absolutely pure evil," Governor Rick Scott said of the incident.

Cruz was seen wearing a maroon shirt as police led him off to a squad car. Video provided to WSVN appeared to show officers cuffing the suspect in the grass.

Police said the suspect, Nikolas Cruz, 19, was in custody.

Israel said earlier that the suspect was taken into custody "without incident" in an area off school grounds.

The high school scene was still being cleared, Israel added, to ensure no other threat remained. Parkland is about 50 miles north of Miami.

The suspect was brought to the Broward Sheriff's headquarters in a blue medical gown after being taken to the hospital.

The suspect was escorted by police in his hospital gown. (WSVN)

"I have already said my prayers to give them comfort, but this is a tough time," he added. "We say 'enough is enough,' but it happens again."

After speaking with authorities, Senator Marco Rubio echoed that sentiment on Twitter saying, "It is clear attack was designed & executed to maximize loss of life."

"There are numerous fatalities," Broward County Superintendent Robert Runcie said. "It is a horrific situation. It is a horrible day for us."

Coral Springs Police asked the public to avoid the area of the high school, saying it was an active scene. A nearby middle school was also locked down as a precaution, officials said.

Officials also said students and teachers should remain barricaded in the school until they could be reached by police.

Video obtained by WSVN showed students throwing their hands in the air as an armed SWAT team entered the classroom while working to evacuate the school. A viewer, who sent it to the outlet, said she got it from her brother who was in the room.

Many students were seen walking or running from the area, the outlet said.

High school junior Noah Parness, 17, told The Associated Press that the fire alarm went off for the second time of the day about 2:30 p.m. He said he and others calmly went outside for a fire drill when he suddenly heard several pops.

"Everyone was kind of just standing there calm, and then we saw a bunch of teachers running down the stairway, and then everybody shifted and broke into a spring," Parness said. "I hopped a fence."

A person who claimed to be at the scene posted pictures to Twitter of students hiding beneath desks in one of the classrooms.

Caesar Figueroa, a parent of a 16-year-old student at the school, said he left work and headed to the area after receiving a phone call from his wife.

"My wife called me that there was an active shooter and the school was on lockdown," Figueroa told The AP. "I got on the road and saw helicopters, police with machine guns."

He said his daughter wasn't answering his phone calls but eventually texted him that she was hidden inside a closet at school with friends.

"She was in a classroom and she heard gunshots by the window," he said of the text. "She and her friends ran into the closet."

Another parent, Beth Feingold, told The AP that her daughter sent a text at 2:32 p.m. saying "We're on code red. I'm fine." But she then sent another text soon afterward saying, "Mom, I'm so scared." The girl was later able to escape the school unharmed.

In a tweet from Broward Schools, the high school was dismissing students and the district's Special Investigative Unit, along with law enforcement, were on site.

President Trump offered his "prayers and condolences to the families of the victims" of the school shooting on Twitter.

"No child, teacher, or anyone else should ever feel unsafe in an American school," he said.

Marjory Stoneman Douglas High School will be closed for the remainder of the week, Broward school district said in a tweet. Westglades Middle School, which was on lockdown during the shooting, will be open Thursday with grief counselors on site to speak to students.

Gov. Scott said on Twitter that he'd spoken to the president, the Broward County sheriff, as well as other officials, in regards to the incident and will "continue to receive briefings from law enforcement and issue updates."

The FBI is also in touch with local authorities and responding to the incident, Fox News confirmed. Sheriff Israel confirmed the agency's involvement and said they'll begin processing the "horrific scene."