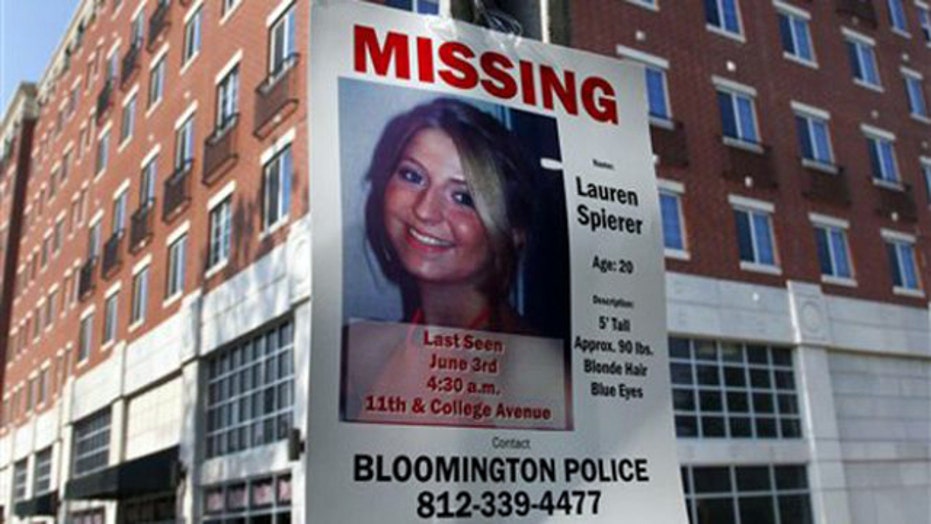 Indiana authorities say they continue to actively investigate the disappearance of 20-year-old Lauren Spierer, two days after the woman's parents claimed they were "stonewalled" by the people who last saw their daughter.

Robert and Charlene Spierer, of Greenburgh, N.Y., have claimed repeatedly that the college acquaintances -- with whom their daughter partied the night she disappeared -- have not been forthcoming in providing key information.

Spierer, a student at Indiana University, was last seen early the morning of June 3, 2011, on the intersection of 11th Street and College Avenue in Bloomington, according to the woman’s acquaintance and college classmate Jay Rosenbaum.

Rosenbaum claims he watched the Spierer walk from his building toward her off-campus apartment complex some three blocks away around 4:30 a.m. the morning she disappeared.

Rosenbaum’s last reported sighting of Spierer followed a night of partying among a group of college friends and acquaintances.

The Spierer family repeated their claim this week, telling ABC's Katie Couric in a taped interview Monday that they have been "stonewalled" by the woman's friends.

"I'm angry. We've been stonewalled, to some extent, by the last people to see Lauren," Robert Spierer told Couric on her show, "Katie."

"Despite their claims of doing whatever they could do, the fact of the matter is they refuse to meet with us, except for one of the boys, they refuse to take a police polygraph, which we feel is important for a number of reasons, one of which is to help narrow down the field of people who really know what happened to her that night," he said.

Charlene Spierer said she believes her daughter was harmed by someone who knew her.

“I think our biggest dilemma is not knowing if it was a random abduction or if it was someone that Lauren knew," she told Couric. "For me personally, I think the events of the evening leave me thinking it was someone who knew Lauren."

In a June interview with FoxNews.com, Robert Spierer said it's possible his daughter, who took medication for a heart condition, could have been drugged at Kilroy’s Sports Bar, a popular college hangout with an outdoor sandy area designed to look like a beach. Authorities reported that Spierer left her shoes and cellphone behind there.

"She could have been given something in her drink, unknowingly, that made her almost incapacitated," he told FoxNews.com.

Spierer, a fashion merchandising major who had just completed her sophomore year, left her apartment complex around 12:30 a.m. June 3 with a friend, David Rohn, to walk to Rosenbaum’s apartment. Once at Rosenbaum’s residence, Spierer met a male acquaintance – Corey Rossman – who lived two doors down from Rosenbaum.

Rossman, who was reportedly on a “no trespass” list at Spierer’s building over a 2010 incident that had occurred there, left his building with Spierer and headed for Kilroy’s Sports Bar. Police said Spierer and Rossman entered the bar at 1:46 a.m. and left at 2:27 a.m.

Many questions surround what happened next.

Surveillance video captured Rossman and Spierer, a petite blonde,  entering her apartment building – known as Smallwood – shortly after leaving the bar. Rossman reportedly claimed he was injured in a fight with other male students on the fifth floor of the building and remembers nothing of what happened during and after the incident. At 2:42 a.m., Spierer is seen leaving her building with Rossman and walking up an alley toward Rosenbaum and Rossman’s apartment complex.

Spierer, who police say dropped her keys and identification card on the way, spent some time at the men’s building before leaving at 4:30 a.m., according to Rosenbaum, who claims he watched from a balcony as she walked toward her apartment. She was never seen or heard from again.

The Bloomington Police Department said in a statement Tuesday that they continue to "actively investigate" the circumstances surrounding the disappearance of Spierer.

"Information received is diligently pursued by the investigators assigned to this case and our commitment to this case is no different today than it was on the day Lauren was reported missing," Capt. Joe Qualters said. "Our efforts will continue as we work to provide answers to Lauren’s family and the Bloomington community."

Spierer, who is 4-foot-11 and weighs 95 pounds, has blond hair and blue eyes. She was last seen wearing black pants and a white top.

A $250,000 reward is being offered for any information leading to Spierer’s whereabouts. Anyone with tips in the case is urged to contact the Bloomington Police Department by phone at 812-339-4477 or by email at policetips@bloomington.in.gov.