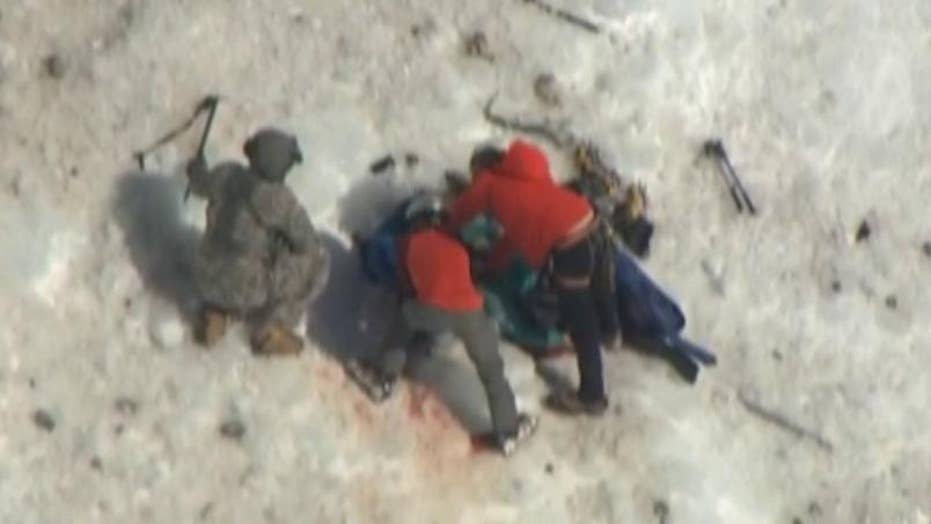 Crews located the climber near the top of Mount Hood, over ten thousand feet above sea level.

A mountain climber in Oregon who had to be airlifted Tuesday from Mount Hood after falling around 1,000 feet has died, officials said.

The man had been rescued by an Oregon Army National Guard chopper and was brought to a hospital in Portland but was pronounced dead after arriving, the Clackamas County Sheriff’s Office said.

A few other climbers in two separate groups also were stranded on the mountain, one of whom was believed to have sustained non-life threatening injuries, officials said.

According to a tweet from the sheriff’s department, four climbers were receiving help from rescuers to get down the mountain while another three were said to be “safely making their way down” on their own.

Of the party of four, which includes the injured climber, another person is "experiencing difficulty moving," officials said.

"Rescuers continue to help them as they race the clock," the tweet said.

The group of three successfully made their way to the Timberline Lodge, the sheriff said on Twitter.

Rescue crews were called to the scene Tuesday morning following reports of a fallen climber and potentially others who were stranded on the Hogsback area of the mountain, near the summit.

Mount Hood, the state’s tallest mountain, is a popular climbing site frequented by thousands of climbers every year.

The peak is notorious for loose ice and rocks in warm weather. The sun has been out this week and the temperature was right around freezing at the spot where the climber fell, according to Russell Gubele of the Mountain Wave Search and Rescue.

"This is the kind of weather conditions and the time of year where you often get falling ice, falling rocks and problems," Gubele said. "It sounds like the conditions up there are very unsafe right now."

Officials said earlier that it was imperative the climbers got off the mountain due to a storm expected Wednesday.