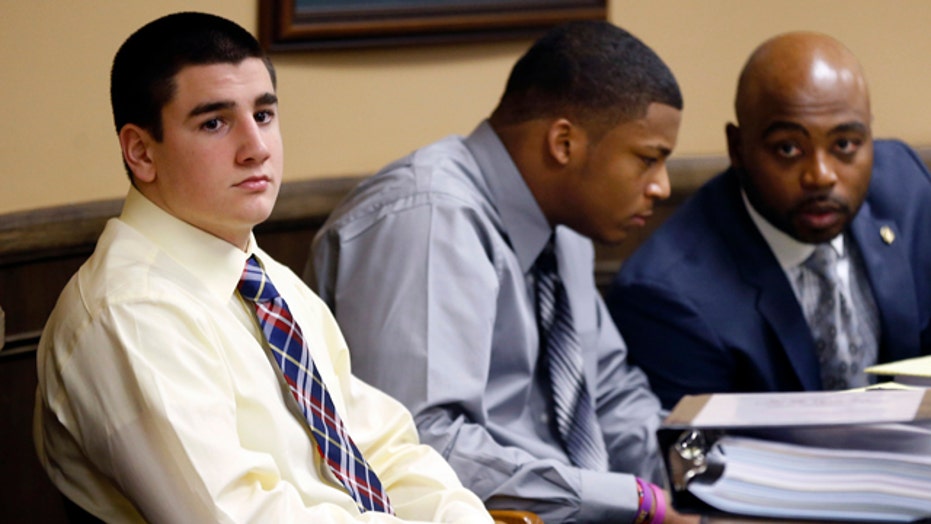 Could accuser have consented as defendants now claim?

STEUBENVILLE, Ohio – The trial of two Ohio high school football players accused of raping a 16-year-old girl began as a contest between prosecutors insisting the girl was too drunk to consent to sex and defense attorneys portraying her as someone who was intoxicated but still in control of her actions.

Prosecutors on Thursday introduced graphic text messages, including messages from the alleged rape victim in which she says she doesn't remember the night of the attack and is trying to find out what happened. The girl also implies that she believes she was drugged.

"Swear to God I don't remember doing anything with them," the girl wrote to a friend who authorities say saw the assaults.

"I wasn't being a slut. They were taking advantage of me," she wrote in another message to the same friend.

Three teenage boys who are key to the prosecution's case are slated to take the stand this week. Defense attorneys could call the girl to testify since a West Virginia judge ruled Tuesday night that she and two of her friends could be subpoenaed.

The case has riveted the small city of Steubenville amid allegations that more students should have been charged and led to questions about the influence of the local football team, a source of a pride in a community that suffered massive job losses with the collapse of the steel industry.

The teens are charged with digitally penetrating the West Virginia girl, first in the back seat of a moving car after a party Aug. 11 and then in the basement of a house. One is also charged with illegal use of a minor in nudity-oriented material.

Prosecutors insist she was too drunk to consent to sex, while defense attorneys have portrayed her as someone who was intoxicated but still in control of her actions.

Witnesses said the girl was so drunk she threw up at least twice and had trouble walking and speaking. She also was photographed being carried by the two boys.

In an excerpt of a videotaped interview with ABC's "20/20," one teen said the photo was a joke. He contends the girl was awake and was a willing participant, the show said.

The texts introduced Thursday in juvenile court also included ones in which the 17-year-old admitted that he digitally penetrated the girl.

He also sent messages to his friends to try to get them to gloss over what happened that night. In a text to a boy who lives in the house where the second attack is said to have happened, the 17-year-old wrote, "Just say she came to your house and passed out."

Authorities said they collected 17 cellphones in their investigation. The evidence they yielded is considered crucial to prosecutors' case against the boys because of photos taken that evening.

If convicted, the accused could be held in a juvenile jail until they turn 21.

Editors’ Note: The Associated Press named the minors charged due to the fact they have been identified in other news coverage and their names were used in open court. FoxNews.com will not name the defendants.