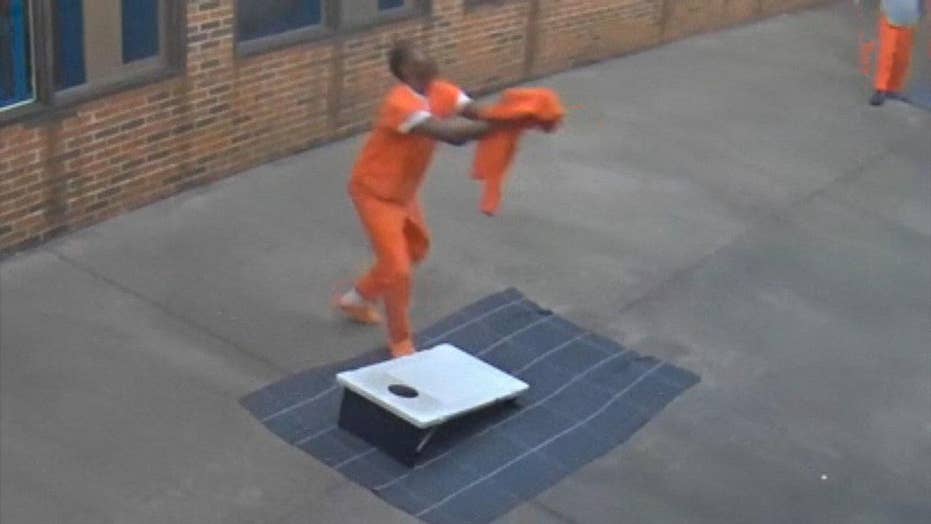 Raw video: Cuyahoga County Jail security footage shows an inmate attempting to catch marijuana and a cell phone that was dropped from a drone.

Ohio authorities released a video this week showing a county jail inmate in the facility accepting contraband — that was dropped off by a drone.

The surveillance footage taken at the Cuyahoga County Jail, in Euclid, on June 21 shows the man, who's outside for recreation with other inmates, as he starts wandering and staring up at the sky.

Suddenly, he jerks forward while holding up his orange jail garb, trying to catch something that falls from the sky, which falls to the ground. The inmate then walks over, using his uniform to pick it up and conceal it, before walking away.

Drones are saving lives in remote parts of Africa

Authorities said the items that were dropped into the jail included marijuana and a phone, WJW reported.

“If it can happen there, it can happen anywhere," Erie County Sheriff Paul Sigsworth said. “You try to stay one step ahead as best you can, but you try to learn from incidents like this locally and nationally."

Drones dropping contraband into prisons or jails is nothing new. In December 2018, a mother and daughter were caught allegedly flying a drone packed with contraband over a Florida state prison. And in July 2017, a South Carolina inmate was able to escape prison by cutting through a fence with wire cutters he apparently received via drone.

Last year, the Federal Aviation Administration (FAA) added new air restrictions for drones, prohibiting them to be flown over 19 prisons.

"This is the first time the Agency has placed specific flight restrictions for unmanned aircraft, or 'drones,' over Federal Bureau of Prisons and US Coast Guard facilities," a press release from the FAA stated in June 2018. "The FAA has placed similar flight restrictions over military installations that remain in place, as well as over ten Department of Interior facilities and seven Department of Energy facilities."