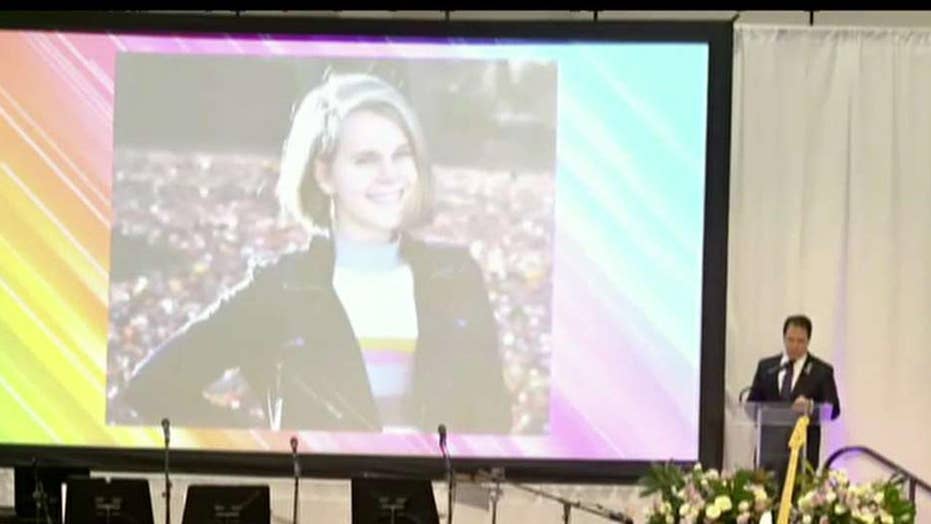 NYPD searching for a 14-year-old boy described as a person of interest in the murder case.

NEW YORK CITY – A 14-year-old boy was released from NYPD custody on Thursday only hours after he was taken in for questioning in the deadly stabbing of Barnard College student Tessa Majors following a week-long search.

Chief of Detectives Rodney Harrison tweeted that finding the suspect "was a significant development in the investigative process," but that the teen had since been released to the custody of his lawyers.

It was not immediately clear why the boy had been released. Harrison said the investigation was still active and ongoing.

A make-shift memorial for Tessa Majors inside the Barnard campus earlier this month in New York City. (AP)

The 14-year-old was one of three youths who police believed were involved in the deadly stabbing of 18-year-old Majors on Dec. 11 in Morningside Park. Three teens between 13 and 14 years old were thought to be involved in the attack.

Police tracked him down after taking the unusual step last Friday of releasing photographs of him -- but not his name or any other identifying information.

Harrison announced in a tweet Thursday morning that the boy had been found, but a police spokeswoman declined to answer questions where and how he was located.

A 13-year-old boy accused of attacking the freshman testified in court Dec. 13 that he handed a knife to his friend, who then stabbed Majors so brutally he saw "feathers come out of her jacket."

The 13-year-old, whose name is not being used by Fox News because he is a minor, has been charged with second-degree murder, first and second-degree robbery and criminal possession of a weapon; he was ordered held without bail by New York Family Court Judge Karen Lupuloff.

NYPD Detective Wilfredo Acevedo testified at a hearing earlier this month that the 13-year-old who has been charged told him during questioning that he was with two other teenage boys at Morningside Park on the evening of Dec. 11, when the two other boys attempted to rob Majors and knifed her when she tried to resist them.

Acevedo said the 13-year-old saw one of the boys in the group grabbing Majors from behind while another teenage boy "sliced her in a stabbing poking motion.”

A second suspect was arrested and questioned, but was released hours later as police sought to build their case against him.

Police had been searching for a third suspect believed to be involved since posting photos of a teen on Dec. 20.

A private memorial service was held at Majors’ high school alma mater in Virginia this past Saturday.