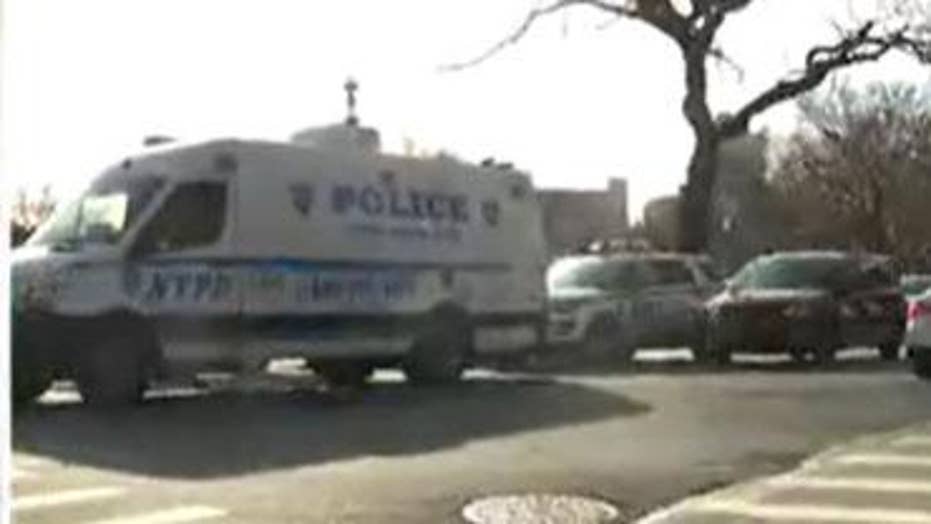 "The New York City Police Department requests assistance from the public in locating this individual. All calls are kept strictly confidential," NYPD Chief of Detectives Rodney Harrison tweeted alongside the images. A separate tweet from the NYPD asked anyone with information to call 800-577-TIPS or send a direct message to the Twitter account @NYPDTips.

The NYPD did not identify the person in the photos.

Majors, 18, was attacked and knifed to death on Dec. 11 in Morningside Park.

A 13-year-old boy accused of attacking the murdered freshman testified in court last Friday that he handed a knife to his friend, who then stabbed Majors so brutally he saw "feathers come out of her jacket." The 13-year-old, whose name is not being used by Fox News because he is a minor, has been charged with second-degree murder, first and second-degree robbery and criminal possession of a weapon; he was ordered held without bail by New York Family Court Judge Karen Lupuloff.

On Monday, the New York Post reported that a 14-year-old boy jumped out of a moving car and fled into the streets of Harlem while he and an adult were en route to meet with police in connection with the case. That suspect is believed to be the teen who fatally stabbed Majors.

A third suspect was arrested last week but was released hours later as police sought to build their case against him.

All three suspects were believed to be between 13 and 14 years old.

NYPD Detective Wilfredo Acevedo testified at a hearing Tuesday that the 13-year-old who has been charged told him during questioning that he was with two other teenage boys at Morningside Park on the evening of Dec. 11, when the two other boys allegedly attempted to rob Majors and knifed her when she tried to resist them.

The boys "went into the park to rob someone,” and followed a man up the stairs of the park but decided not to rob him, Acevedo said, relaying what the suspect told him.

The trio then saw Majors, at which point the 13-year-old told detectives he "picked up the knife and handed it to one of the individuals," Acevedo said.

People pause and place a candle at a makeshift memorial for Tessa Majors inside the Barnard campus. (AP Photo/Mary Altaffer)

“One of the two individuals asked the victim, Ms. Majors, to rob her. She refused... One of the individuals had the knife, [he] stabbed her,” the detective said, adding that the suspect said he "was a few steps away."

Acevedo said the 13-year-old saw one of the boys in the group grabbing Majors from behind while another teenage boy "sliced her in a stabbing poking motion," he said.

The injured college student reportedly stumbled up the stairs of the park after being left for dead and eventually found a security guard, who called 911.

Officer Ena Lewis testified at the hearing Tuesday that Majors had blood on her face, was lying facedown in the park, and wheezing while she tried to catch her breath. The student had lacerations on her face and several stab wounds on her body, according to Lewis, who said she administered CPR at the scene and in the ambulance, but to no avail.

Another hearing is scheduled for Jan. 2.