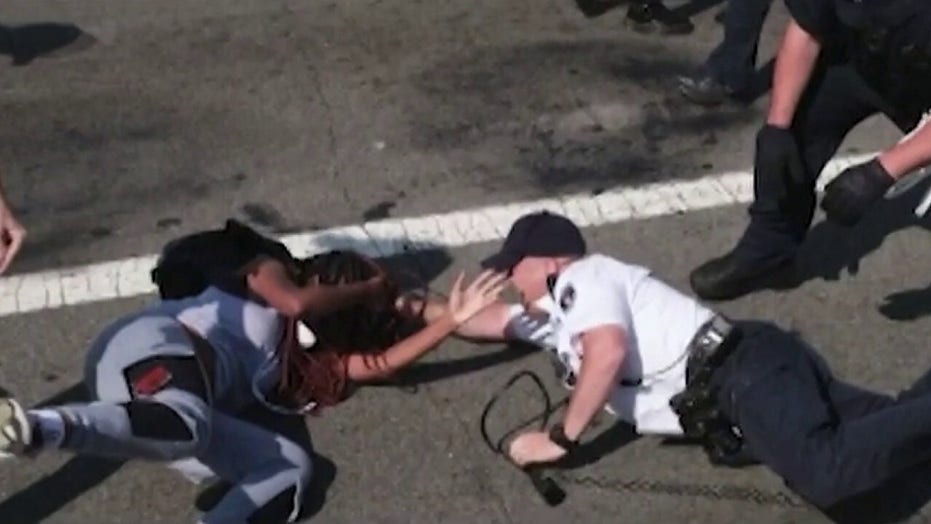 Terence Monahan says police officers are feeling the animosity against them on the streets as a suspect in the Brooklyn Bridge attack is released without bail; reaction and analysis on 'Outnumbered.'

The woman charged with using a cane to bash two NYPD cops over their heads on the Brooklyn Bridge whooped and jumped for joy when she was released from custody Friday afternoon.

Chanice Reyes was apparently so happy at being freed that she didn’t even bother flipping the bird at a Post photographer — as she repeatedly did following her arrest a day earlier.

After emerging from the Manhattan Detention Complex — also known as “the Tombs” — Reyes, 25, exchanged hugs with several pals on Baxter Street shortly after 1 p.m.

She then headed to the nearby “Occupy City Hall” encampment, where she disappeared inside a makeshift, black tent.

The city Department of Correction didn’t immediately respond to an inquiry about how she secured her release.

Reyes is accused of attacking NYPD Lt. Michael Butler and Sgt. Richard Adamiak — leaving them with blood streaming down their faces — as they arrested a fellow anti-cop activist on Wednesday.

The incident came amid clashes that erupted when counter-demonstrators attempted to disrupt a “unity” march against the bridge that included a contingent from the Sergeants Benevolent Association.

Defense lawyer Michael Horn described her in court as a “kind and generous young lady” and a Black Lives Matter activist” who’s “enrolled full time at Queens College, working on a Bachelor of Science degree.

On Thursday, NYPD Chief of Department Terence Monahan — who was also injured on the bridge — described two other activists busted Wednesday as “part of this anarchist group that has been infiltrating this Black Lives movement since the beginning.

“It is a legitimate movement, but it is being hijacked by these anarchists, and they are the ones that have been attacking our police officers [and] are out hiding behind the many, many peaceful protesters that are out there,” Monahan told Fox 5’s “Good Day New York.”