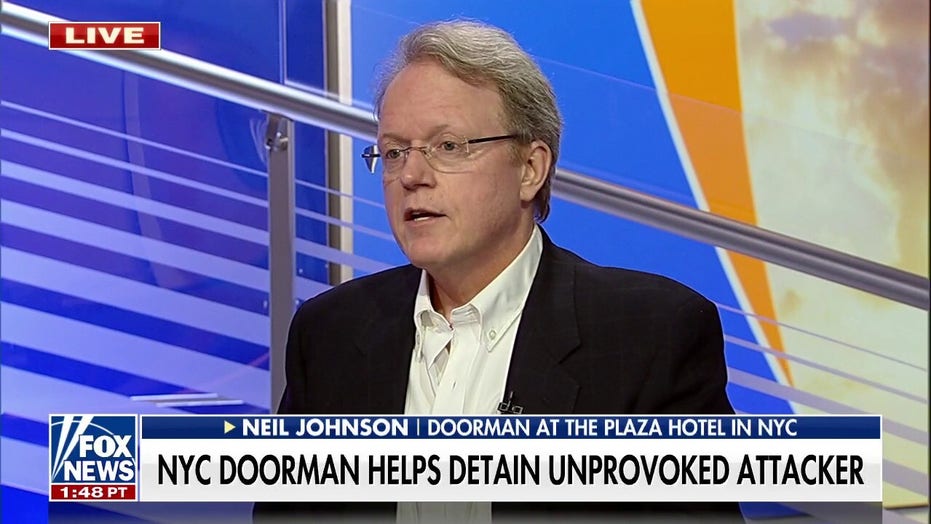 Plaza Hotel doorman Neil Johnson sits down with 'Fox & Friends First' to share his story of detaining a man who assaulted a 9-year-old girl.

A father and son duo from Queens are being hailed as heroes after they put their bodies on the line to help an elderly woman who was being robbed outside their pizzeria on Saturday night.

Louie Suljovic, the 38-year-old owner of Louie's Pizza & Restaurant in Elmhurst, was in the pizzeria with his father on Saturday night when they saw two men push a woman from behind and take her bag, according to a criminal complaint filed by the Queens District Attorney's Office.

Both of the Suljovics jumped into action to help the woman, but the two suspects pulled out knives and started swiping at them.

The outside of Louie's Pizzeria where the alleged robbery took place.  (NYPD 110th precinct)

"Trying to take a breath, but it's hard to take a real breath, and you feel like a bubbling inside," Louie told WABC on Tuesday, noting that they'll take a few weeks to recover. "My dad's a bull, like old school men. They don't make them like they used to."

Louie's Pizzeria is closed while the father and son recover.  (NYPD 110th precinct)

The Suljovics are now recovering at the Elmhurst Hospital in Queens, which is the same hospital to which Louie donated meals during the height of the pandemic to help out the staff and first responders.

"He and his father are among the very best New York has to offer," the NYPD 110th precinct tweeted. "We thank them for their bravery and wish them a speedy recovery."

Whack told officers that after the elderly lady started screaming, "Honestly I didn't know what to do, so I just stabbed him," according to the criminal complaint.

Whack is due back in court on April 1. The other suspect, Gooding, is still awaiting arraignment, a spokesperson for the Queens District Attorney's Office said.