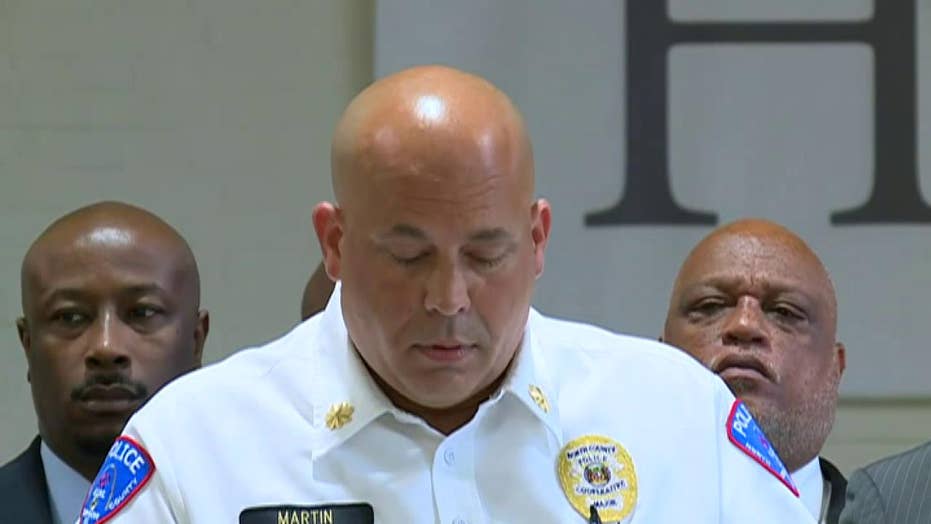 Police in Pine Lawn, Missouri hold a press conference on the fatal shooting of a North St. Louis County officer

Raw video: Officials hold a press conference on the matter of a police officer shot and killed responding to a bad check complaint at a food market.

A 26-year-old man from North Carolina has been charged with murder for shooting and killing a Missouri officer who was responding to a call in North St. Louis County on Sunday, police said Monday.

Bonette Kymbrelle Meeks, 26, has also been charged with armed criminal action, unlawful possession of a firearm and resisting arrest.

Officer Michael Langsdorf, who had been with the North County Police Cooperative for three months, was responding to a bad check report at a food market on Sunday when Meeks shot and killed him, police said.

Police added that Meeks was trying to cash the bad check.

North County Police Cooperative Major Ron Martin, who introduced himself as a friend of Langsdorf's while holding back tears, told reporters on Monday he has known the officer for 20 years.

“Mr. Meeks was successful in executing a cop yesterday and a good one,” Martin said.

The North County Police Cooperative’s chief, John Buchanan, told reporters that Langsdorf responded to Clay Wellston Food Market Restaurant, about a 15-minute drive from St. Louis, around 4:30 pm on Sunday and about five minutes later, a call came in for “one of our officers down.” Langsdorf, 40, was pronounced dead at a St. Louis hospital about 40 minutes later.

Martin told reporters on Monday that when Langsdorf confronted Meeks inside the market “a struggle ensued between both of them,” adding that “the entire incident was captured on surveillance video.”

Martin told reporters he watched the surveillance video and described what he saw.

Martin said after Meeks shot Langsdorf in the neck, Meeks fled on foot “gun in hand” and assisting officers caught him shortly thereafter.

Martin said that when Meeks was arrested, “he was armed with the pistol he used to murder Officer Langsdorf.”

Officer Langsdorf had 17 years of prior police experience, according to a post on the North County Police Cooperative’s Facebook page.

“Michael was an outstanding officer. In his short time with our department, he has taken our young officers under his wing and was mentoring and guiding them,” Buchanan told reporters on Monday.

He added, “When we first met he said to me several times, 'All I wanted to be was a police officer and do police work. It was really all I knew how to do.' He told me that numerous times.”

“He [Langsdorf] had a lot of police experience. You never would have thought that this type of police officer would have been put in that position but it happened,” Martin told reporters on Monday. “There’s no such things as a routine call. This is the dangers that our police officers in this community face every day.”

He added, “I can tell you that Mike was a pretty big part of us even though he was here a short time.”

“Meeks remains in custody with NO BOND ALLOWED,” according to a post on the North County Police Cooperative’s Facebook page.

Police said Meeks has an extensive criminal history and is a multi-convicted felon in North Carolina.

According to criminal records obtained by Fox News, Meek’s criminal history includes numerous convictions for the possession or sale of narcotics.

“We never had an officer involved shooting in the four years we’ve been here and we’ve never had a police officer killed in the line of duty,” Martin said.

Langsdorf left behind two children, a fiancé and his parents.

“Our department is going to wrap our arms around you and support you through this difficult time,” Buchanan said, addressing Langsdorf’s family.