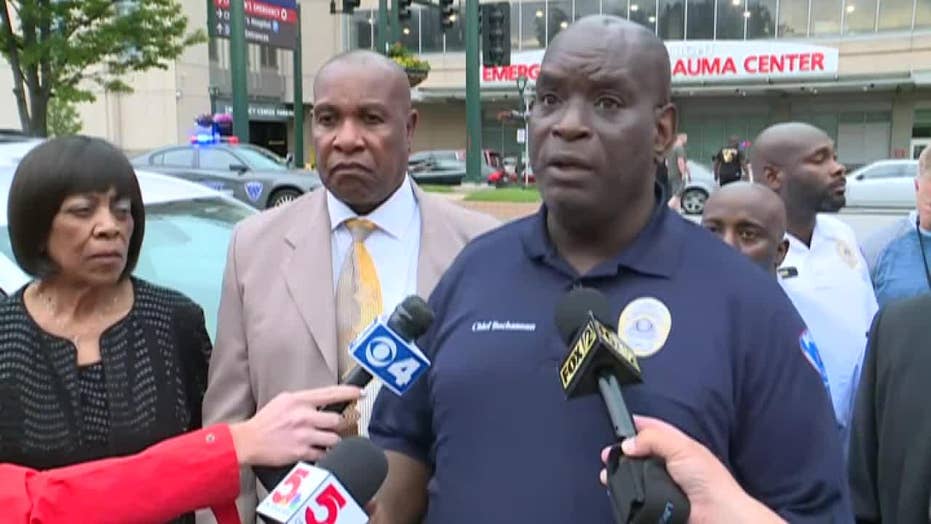 North County Police Cooperative Chief John Buchannan spoke with reporters in Missouri after an officer in his department was shot and killed.

A Missouri officer shot while responding to a call in North St. Louis County has died and a suspect is in custody, according to police.

Officer Michael Langsdorf, who had been with the North County Police Cooperative for three months, was responding to a bad check report at a business, the department’s chief, John Buchannan, told reporters on Sunday.

Langsdorf, 40, was shot by the person trying to cash the bad check, police said. He did not identify the suspect.

Buchannan spoke with reporters outside a St. Louis hospital where Langsdorf had been taken after the shooting. Buchannan said a gun was recovered from the scene.

Langsdorf had 17 years of prior police experience, according to a post on the North County Police Cooperative’s Facebook page.

He said Langsdorf responded to Clay Wellston Food Market Restaurant, about a 15-minute drive from St. Louis, around 4:30 CT and about five minutes later a call came in for “one of our officers down.”

The Maryland Heights Police Department, which is also located in St. Louis County, tweeted on Sunday, “We are deeply saddened to hear of the passing of a North County Cooperative Police Officer. This is a senseless tragedy that did not have to happen.  Our thoughts and prayers go out to the family and friends of the officer.”

Langsdorf left behind two children and a fiancé.

“Our thoughts and prayers are with PO Langsdorf's family and friends,” The North County Police Cooperative’s Facebook post read.

Buchannan said the investigation was ongoing and more information will be released on Monday morning.