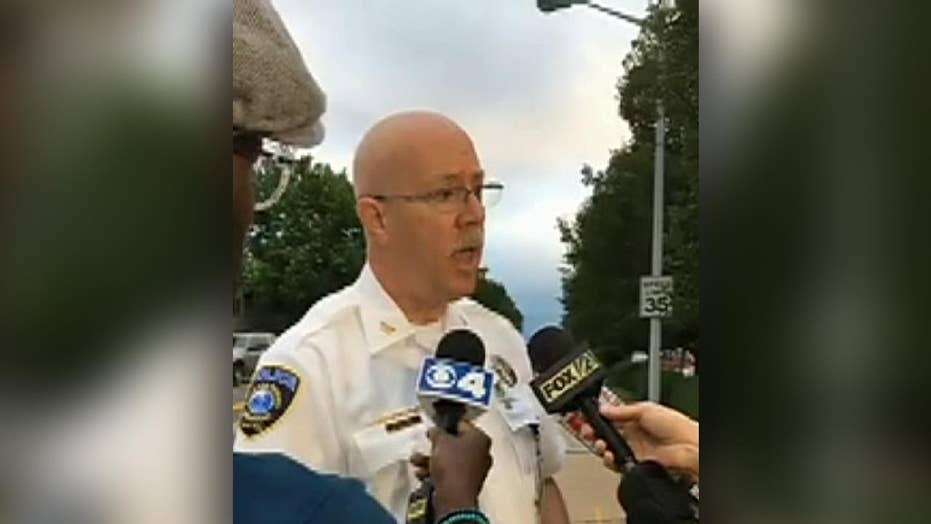 Police held a press conference after a Maryland Heights police officer is shot twice by a suspect police said was caught breaking into a vehicl.

A Missouri police officer was shot early Thursday and two people have been arrested after two officers confronted a teen allegedly breaking into a vehicle, police said.

Police said the officers involved were from the Maryland Heights Police Department’s Community Response Unit and were assigned to patrol parking lots and neighborhoods looking for people breaking into vehicles. Maryland Heights is about a half-hour from St. Louis.

In a press conference on Thursday, Maryland Heights Police Chief Bill Carson said: “A lot of communities have had problems with car break-ins, apartment parking lots, hotel parking lots, different locations throughout the municipality. Unfortunately, it seems like we have been getting a lot of guns stolen out of cars, people leaving guns in their cars.”

MISSOURI SUSPECT SHOT BY POLICE AFTER SHOOTING AT MOTHER OF HIS CHILD, AUTHORITIES SAY

He added: “So we had a rash of car break-ins. We had officers out on surveillance trying to catch the people who were doing that. So these officers were on a specific assignment to watch the parking lots, to try to catch people that were breaking into cars.”

Around 3:50 a.m., two officers spotted a suspect in a vehicle break-in, identified as Menuis Ellis of Pine Lawn. When they approached the 17-year-old and identified themselves as officers, police said, Ellis started shooting.

One of the officers was hit twice in the lower body and was rushed to the hospital with non-life- threatening injuries, according to the Maryland Heights Police Department. The second officer, the wounded officer’s partner, “returned fire,” police said, and Ellis, who was not hit, took off on foot.

He was found by responding officers a short time later, police said.

Police said a second suspect, Davina Parker of Jennings, was also taken into custody. Police said Parker, 26, was acting as the getaway driver, and she has been charged with stealing, a misdemeanor.

A gun was recovered at the scene, and Ellis admitted it belonged to him, according to The Maryland Heights police.

“That’s another thing that’s really scary for our officers. Because we’re getting so many guns stolen out of cars, the people that we are encountering that are breaking into cars are armed, which makes it even more scary,” said Chief Carson.

Ellis has been charged with assault, armed criminal action and stealing. His bond has been set at $1 million.

The officer who was shot, 38, is described as a nine-year veteran of the department with 14 years of experience as an officer under his belt, officials said.

A department spokeswoman said the officer has been released from the hospital but is scheduled to go back on Friday to determine the next steps in his recovery.

“Early reports that we have, he is expected to make a full recovery,” Carson said.

He called the injured officer “outstanding,” adding that his partner has been with the department for eight years and is also “an outstanding officer.”

“We are relieved that the injuries were not more serious than they appeared to be at first,” Carson said, adding that an officer with the department had not been shot on the job in about nine years.

He said the officers involved will be placed on administrative leave, which is standard procedure.