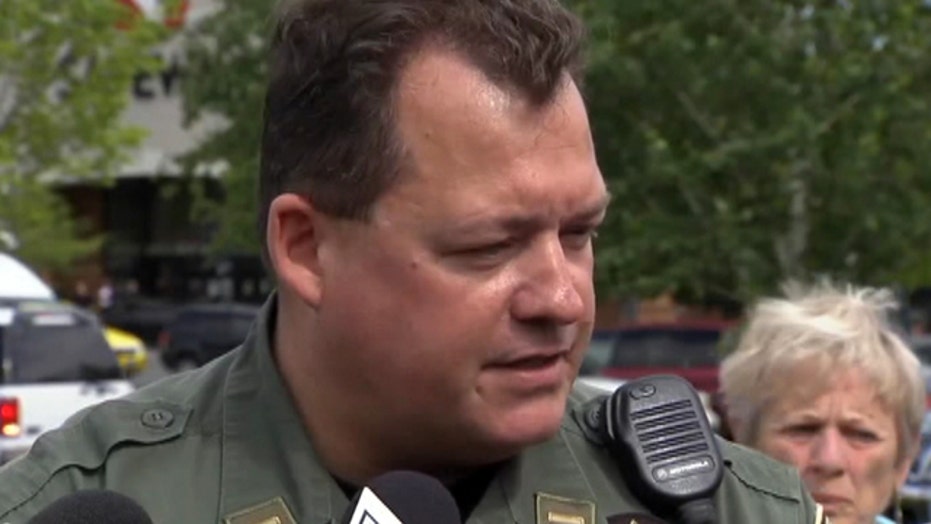 Investigators looking for a motive in a fatal high school shooting near Portland, Oregon say they have not yet been able to find a link between the gunman and the student he killed.

Padgett, who was also a freshman at the school, got off the bus carrying a guitar case and a duffel bag, according to Anderson. When he arrived at the school, he entered the locker room where he murdered Hoffman with an AR-15 style rifle, Anderson said Wednesday.

Teacher Todd Risler then encountered Padgett and was grazed by a bullet to the hip as he was fleeing the area. While bloodied from the wound, Risler ran to the school’s front office and notified administrators of a gunman, which prompted a school-wide lockdown.

Padgett left the locker room and exchanged gunfire with responding officers before he entered a bathroom and killed himself with a self-inflicted gunshot wound, Anderson said.

Authorities say Padgett was also found with a semi-automatic handgun, a large knife, and 9 loaded magazines with the capability of carrying several hundred rounds. He was wearing a non-ballistic vest and a multi-sport helmet with a camouflage design.

“I cannot emphasize enough the role of Mr. Risler and responding officers played in saving many, many lives yesterday,” Anderson said.

Police say the guns found on Padgett were taken from his family’s home.

A girl who used to be Hoffman's girlfriend said he was "a good kid" and a "down-to-earth guy."

"He was very caring, he loved to joke around," said Savannah Venegas, 16.

Hoffman lived with his mother and had an older brother and two younger sisters, both in elementary school, Venegas said.

Anderson said he spoke with Hoffman's family, saying they had a difficult road ahead and sought privacy.

"They wouldn't have just picked him," she said. "It had to be, just, random."

The teacher, Todd Rispler, had injuries that weren't life-threatening, and he was treated at the scene. Rispler is a 50-year-old physical education instructor and former track coach.

About 2,800 students attend the school, located in a quiet tourist town of 15,000 near the Columbia River, about 16 miles east of downtown Portland.

On Tuesday evening, teens on skateboards and others accompanied by their parents joined Oregon Gov. John Kitzhaber at a prayer vigil at a church about 5 miles from the shooting scene.

"I'm here for him, for Emilio," 15-year-old Jose Medel told The Oregonian. Medel is a freshman who said he played soccer for several years with Hoffman.

Doug Daoust, the mayor of Troutdale, told Fox News Tuesday that SWAT teams evacuated classrooms from the school one at a time. TV news broadcasts showed students being escorted away from the school with their hands on their heads, The Associated Press reports.

Parents reunited with students at the Fred Meyer supermarket in Wood Village. A reporter from The Oregonian, who was at the supermarket, tweeted that employees brought out water and cookies for parents.

Mandy Johnson said her daughter called from a friend's phone.

"I thank God that she's safe," said Johnson, who has three younger children. "I don't want to send my kids to school anymore."

The Oregon violence came less than a week after a gunman opened fire on a college campus in neighboring Washington state, killing a 19-year-old man and wounding two others.

The Tuesday shooting was the first fatal school shooting in Oregon since May 1998 when 15-year-old Kip Kinkel killed two students and wounded 25 others at Thurston High School in Springfield near Eugene. He killed his parents prior to the attack and is serving an 111-year prison sentence.

On Tuesday, a mournful President Obama conceded he was ashamed as an American and terrified as a parent that the United States can't find it in its soul to put a stop to rampant shooting sprees. Barring a fundamental shift in public opinion, Obama said, "it will not change."

Fox News’ Dan Springer and The Associated Press contributed to this report.