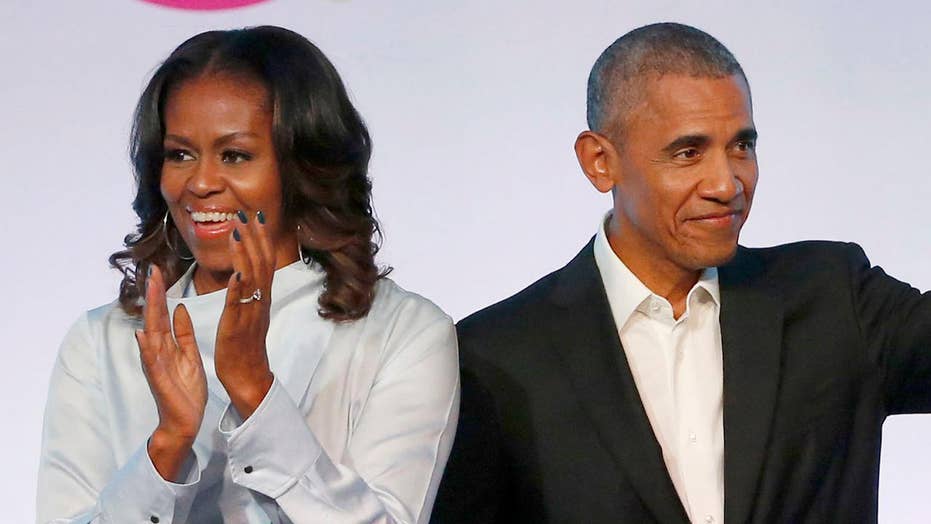 Michelle Obama in an interview Saturday evening said the night before President Trump’s inauguration in January 2017 was “very emotional.”

"The truth is, on that day I was moving my children out of the only house they had really grown up in,” the former first lady told Gayle King of CBS News at the Essence Festival in New Orleans. “I think that gets lost on people.”

She said she was rushing to get her daughters and their friends out of the White House after they’d had a sleepover the night before the inauguration.

“The girls didn't get up,” she explained. “They're all crying and they have their teddy bears and they're moving slow and I'm like, 'You've got to get up and get out of this house.' And I don't know where these kids are going, but they had to get up and out of that house. So you've got tears and I'm pushing people out a freight elevator and my kids are crying.”

Michelle Obama speaks to Gayle King during the 2019 Essence Festival at the Mercedes-Benz Superdome, Saturday, July 6, 2019, in New Orleans. (Photo by Amy Harris/Invision/AP)

She said she and former President Barack Obama then had to meet with the Trumps.

“I didn't want to go out and greet them with tears in my eyes because people would think I was crying for other reasons,” Mrs. Obama said, according to CBS News.

The former first lady said after eight years of watching her husband “get raked over the coals” and feeling like they had to be perfect, "It was a lot emotionally that when I got on that plane, it was a release."

She also spoke personally about marriage and motherhood, saying kids can “take up all the oxygen in the land.”

“That's why they make the babies cute because you would leave them at the post office,” she joked.

She told King the most important thing in a marriage is for spouses to be equals.

"My husband is my teammate and if we are going to win this game together, he has to be strong and he has to be OK with me being strong,” she said.

Mrs. Obama also waded into the 2020 election, telling King she and her husband are supportive of all the Democratic candidates and plan to support whoever wins the primary because the general election is “so important.”

She appeared to criticize Trump without using his name.

“The leader of the free world with a tweet can start a war, can crush an economy, can change the future of our children,” she said, adding the next president needs to have “deep seriousness and focus” and operate “with a clear base of facts and ideas."

“The leader of the free world with a tweet can start a war, can crush an economy, can change the future of our children.”

She said she thinks her husband sometimes made the presidency look easy.

Obama said people forget how many punches they took to win the White House and that for a bit she was portrayed as “an angry black woman who was emasculating her husband.” Both Democrats and Republicans were afraid of “the strength of a black woman,” she said.

She added that she knew when she became the first lady she would have to “earn [her] grace.”

“I want all young girls out there to know - we all struggle with that, people of color, working-class folks, women of color - people try to define us in a negative way before we get a chance to get out there and tell our own stories,” she said.