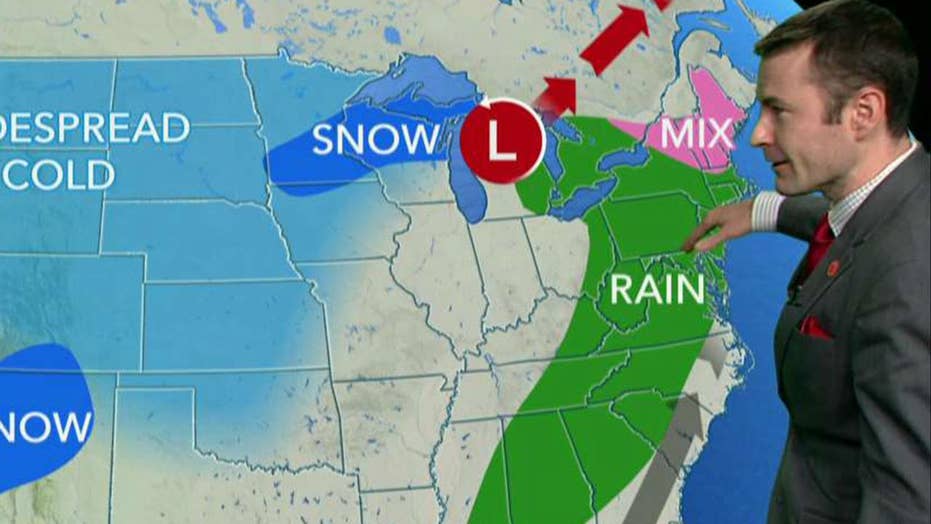 Revelers heading into New York's Times Square on New Year's Eve better make sure they have a raincoat or even a waterproof suit.

A major storm system is expected to create a washout across the East Coast on Monday night into Tuesday, just as revelers are counting down the final moments before 2019 begins.

"Consistent with the theme of 2018, we are ending the year, the final hours of 2018 will be wet across the Northeast," AccuWeather Meteorologist Geoff Cornish said Sunday on "America's News HQ." "We will, unfortunately, be dealing with some widespread rain at Times Square."

The National Weather Service Weather Prediction Center said that a storm system moving out of the western Gulf of Mexico and into the Lower Mississippi Valley will bring heavy rain through Alabama and Georgia that could create flash flooding in some areas.

As the storm system moves east on Monday, rain will push into the Ohio Valley and into the Northeast. Between 1 and 2 inches of rain is expected, and may be enhanced in some areas by thunderstorms.

"This could spell a rather wet though mild New Year's Eve by midnight for partygoers in the Northeast," the NWS said.

The forecast for conditions across the country at midnight on New Year's Day, as revelers are ringing in 2019. (National Weather Service)

That would be in stark contrast to last year, when the ball dropped in Times Square and the temperature was around 10 degrees with a real-feel temperature of -5 degrees.

Cornish said Sunday that temperatures will be around 45 degrees when the ball drops, but it'll be very wet.

"It's tough to over prepare for several hours standing in the rain," he said.

Farther south, the NWS said that much of Florida will remain protected from the rainfall to the north, which will allow temperatures to rise to near-record highs for the end of December in low to mid 80s.

While the East Coast will be rather wet, locations out West will be dealing with colder precipitation.

After the storm moves out, "extreme cold" is expected to impact the region.

Light snow is also expected to spread eastward on Monday across the Dakotas into Minnesota along the arctic boundary.