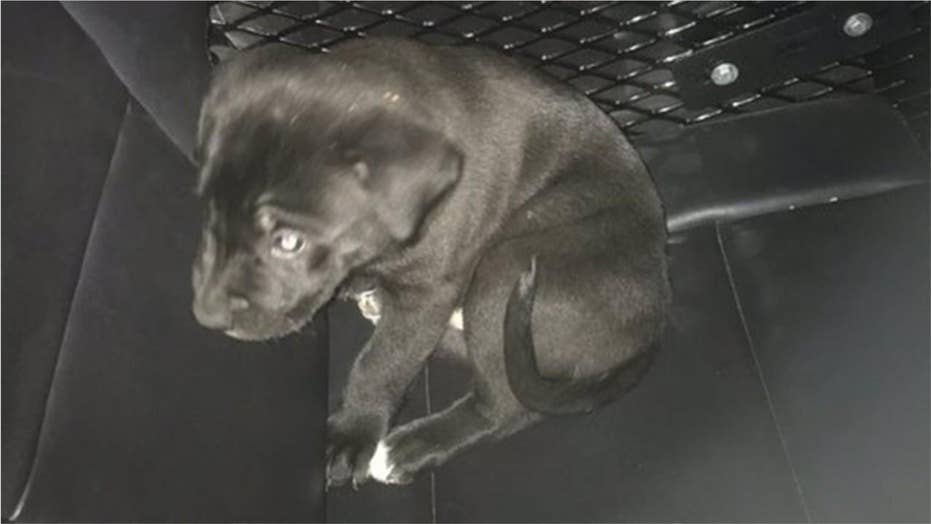 A nearly naked Colorado man tossed a puppy into car. When arrested, the unidentified man blamed drugs for the incident.

A nearly naked man, who was allegedly using methamphetamine for the first time, threw a puppy into a car parked at gas station in Pueblo, Colo. early Sunday morning, a report said.

The incident, which occurred around 4:30 a.m. in the 400 block of South Santa Fe Avenue, happened as the man approached a car that had run out of gas and allegedly threw the dog into the car – which was occupied by a woman and her daughter, the Denver Post reported.

Pueblo police were called to a gas station Sunday morning after a man, who was allegedly high on methamphetamine for the first time, threw a puppy in a car with a woman and her daughter. (Pueblo Police)

The woman called the police, who arrived to find the puppy cowering under the car.

Officer Keegan Verdugo lured the puppy out from beneath the car by offering it some of his dinner, police reported.

The man – dressed only in boxer shorts – allegedly admitted he was under the influence of the drug at that time, the newspaper reported.

“It didn’t go well for him and he was apparently hallucinating,” Pueblo police said in a Facebook post.

The puppy was taken by animal control and will “hopefully find a good home,” police said. The man, who was not immediately identified Sunday, will be charged with animal cruelty, the Post reported.

A witness to the incident took the woman and her daughter to get gas for their car, according to police, and they continued on their way after the incident.