Former Mount Holyoke student Annabella Rockwell says she was taught by the liberal college that she was a victim of patriarchal oppression and underwent 'deprogramming' after graduation on 'Tucker Carlson Tonight.'

New York City pharmaceutical heiress Annabella Rockwell is claiming that her mother paid a $300-a-day "deprogrammer" after believing her daughter had been "brainwashed" by attending an all-female elite liberal college that left the young woman "totally indoctrinated" and estranged from the parents who raised her.

"I left school very anxious, very nervous, very depressed and sad," Rockwell, now 29, recently told the New York Post. "I saw everything through the lens of oppression and bias and victimhood. I came to the school as someone who saw everyone equally. I left looking for injustice wherever I could and automatically assuming that all White men were sexist. My thoughts were no longer my own."

Rockwell, a former competitive figure skater who grew up on the Upper East Side, told the Post that at first she was elated to attend Mount Holyoke College — a $60,000-a-year women’s institution in rural Massachusetts — in 2011.

Unlike other first-year students, she said she did not participate in the "MoHo chop," an initiation ritual meant to shrug off gender roles by cutting one's hair. By her junior year, however, Rockwell told the Post that she noticed a shift in herself after taking a gender studies class. 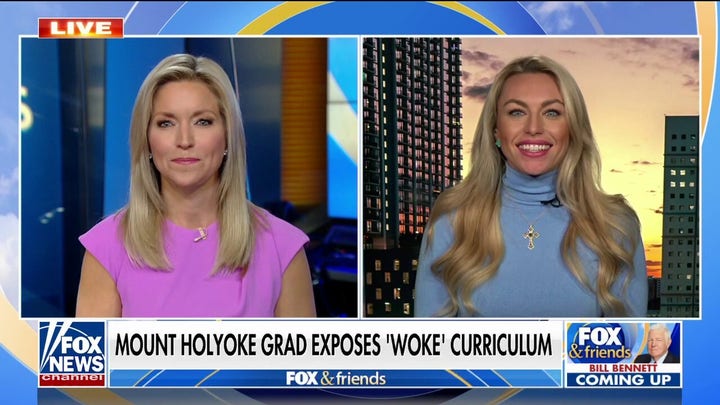 "This professor tells me about the patriarchy," Rockwell said. "I barely knew what the word meant. I didn’t know what she was talking about. I wasn’t someone that into feminism. I just knew that I felt I had always been free to do what I wanted. I never experienced sexism. But I was told there’s the patriarchy, and you don’t even understand it’s been working against you your whole life. You’ve been oppressed, and you didn’t even know it. Now you have to fight it. And I just went down this deep rabbit hole."

That’s when she said her relationship with her mother, whom she once considered a best friend, changed.

"I felt I had to teach her how she was wrong and expose her and to do that with everyone who didn’t see things correctly," Rockwell said. "The professors encouraged alienation [from parents] and even offered their homes to stay in. They’d say, like, ‘Don’t go see them, come stay with us for the holiday.’ Most of my classmates believed all this stuff, too. If you didn’t, you were ostracized."

Her mother, Melinda Rockwell, told the Post she believed that her daughter had been brainwashed. She admitted that during one heated argument at the family’s Palm Beach, Florida, home, she threw a vase through a window in anger over what had become of her daughter. In addition to the costly "deprogrammer," she also enlisted help from her daughter’s former tennis coach, Scott Williams, but was warned it might take seven years before Annabella would revert to her old ways of thinking.

"It was like walking a tightrope," Melinda Rockwell said. "I couldn’t push too hard or I’d lose her, but if I let go, I felt I might not see her again. It was as bad as trying to get a child off the streets who’s on heroin. Everyone is so sure it won’t happen to their child. But it will. [Professors and older students] tell the students they are special — it’s like they are anointed — then they tell them how oppressed they are and what victims they are and how they have to go out in the world and be activists to stop the oppression."

Another former Mount Holyoke College student, 29-year-old conservative activist Laura Loomer, spoke to the Post about the campus culture, saying that she left after just one semester freshman year due to bullying.

"The entire culture there revolved around hating men and being a lesbian," Loomer told the Post. "Mount Holyoke and all the Seven Sisters [schools, including historically women’s colleges Barnard, Bryn Mawr, Smith, Radcliffe, Vassar and Wellesley] were designed to be these elite institutions for women at a time when places like Harvard just took men. But they’re no longer places for ideas and debate and a well-rounded education. They’re centers for indoctrination."

"If you send your kid there, you’re signing them up to hate the patriarchy and White people and the founding stock of our country," she added. "It’s a bastardization of higher education for the sake of weaponizing naive young women for the sake of advancing a toxic agenda."

Annabella Rockwell, who worked for Hillary Clinton’s 2016 presidential campaign after graduating with a history degree, credited her mother’s "relentlessness."

"If my mom had not kept harping at me and not given up, I know where I would be right now," Rockwell told the Post. "Mount Holyoke met its match in my mother. If it wasn’t for her, I’d probably be living in Massachusetts, working for some super-progressive politician, hanging out with people I had nothing in common with except ideology and drinking all the time. And I’d be miserable. But I’d be too stubborn to look at myself in the mirror. I had to really humble myself to admit that I was wrong. And that everything I was told was so hypocritical."

She also said that her views began to change during the 2020 George Floyd protests.

"My social media feed was an echo chamber of everything I’d been taught at Mt. Holyoke," Rockwell said. "Everyone had the black square and it was all ‘no justice, no peace.’ But I was starting to think to myself, ‘Why are we burning down businesses in the name of empowerment? How is this helping Black people? It just doesn’t make sense.’ It just began to click in that moment about how hypocritical it was."

Rockwell, who now fundraises for conservative advocacy group PragerU, said her intention is not to smear other classmates, recognizing how they were all "young and impressionable" in a campus environment where "diversity of opinion was never allowed."

Fox News Digital reached out to Mount Holyoke College for comment on Sunday, but they did not immediately respond.