The protester, who claimed to be a Navy veteran, joined senior correspondent Mike Tobin for a live interview on "Hannity" while carrying a pig's head topped by a police had and impaled on an American flagpole.

"I was out here last [Tuesday] night and I was simply over there having some words with officers," the man explained. "Somebody else shone a flashlight on them, and I got Maced in the face for the second time by police officers in my life. It hurt really, really bad. And I got really, really upset and I went and got this pigheadedness thing today."

"What about the people that are throwing rocks, bottles, bricks and other projectiles at the cops?" asked host Sean Hannity. "And does he paint with such a broad brush and characterize all cops like pigs, the way he's holding up there?"

"Well, we don't use tear gas," the man answered after Tobin relayed the question. "We don't use gas. Gas is against the Geneva Convention --

"But it's harmful," Tobin interjected, referring to the projectiles.

The man went on to explain that he believes "the institution of policing is bad. There's probably some really good folks ... but they just have terrible jobs." 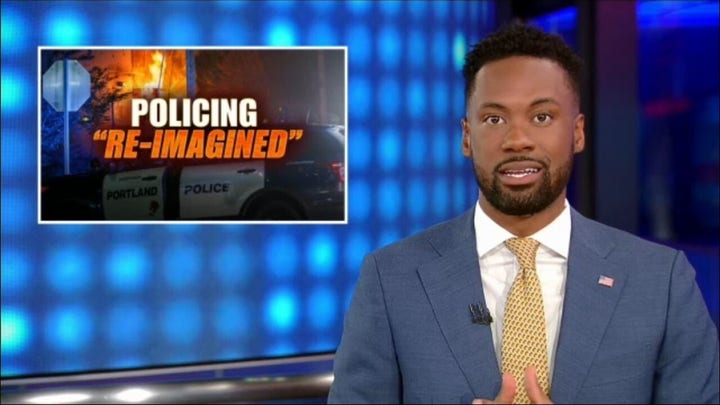 "What does he want instead?" Hannity broke in.

"An entirely different way of policing," the man answered.

"What do you mean by that, some kind of community-oriented policing?" Tobin asked.

"I'm not qualified to make that decision, but I know smarter people that are," answered the demonstrator. "And it certainly isn't what we have now."

When Tobin asked about Potter's release on bond after being charged with second-degree manslaughter, the man didn't mince any words.

"To me, that's pretty much an outrage. I think that this lady essentially works for a occupying force here and she committed an act of war on somebody. I consider that an act of war. And she should not be out on bond. And it is not manslaughter. It is an act of war."