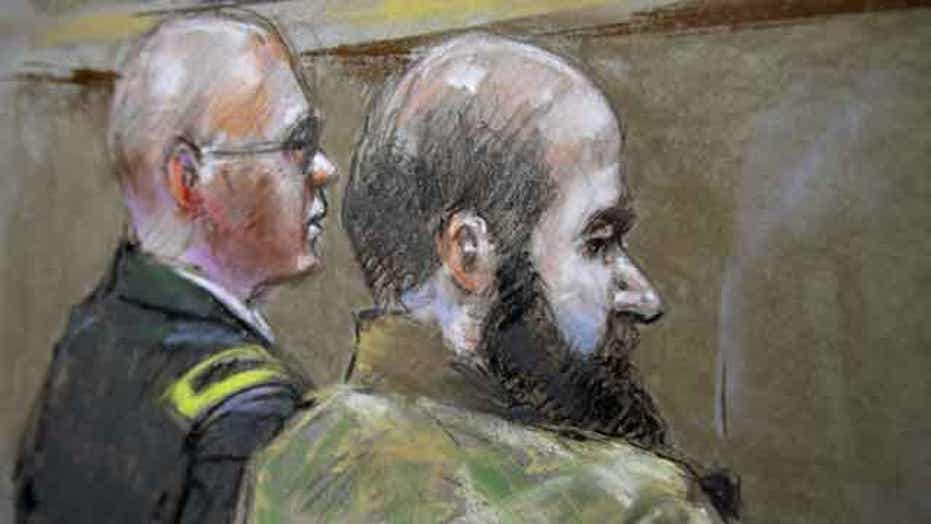 Jurors in the court-martial of Fort Hood shooter Maj. Nidal Hasan ended deliberations for the day Thursday after failing to reach a verdict..

Maj. Nidal Hasan is accused of killing 13 people and wounding 30 others at the Texas military base in 2009.

The case was given to jurors Thursday afternoon, who deliberated for about three hours before asking the judge if they could review testimony from the Fort Hood police officer who shot the gunman and ended the rampage.

The judge agreed before dismissing the jurors for the night. Deliberations are scheduled to resume Friday morning.

Earlier Thursday, Hasan passed on his final chance to address jurors, even after prosecutors insisted he carried out a planned attack and asked jurors for a verdict that would allow the death penalty.

Maj. Nidal Hasan is acting as his own attorney but declined to plead his case after prosecutors wrapped up their closing argument. When the judge told Hasan he could begin, he said: "The defense chooses not to make a closing statement."

Hasan is facing numerous counts of premeditated murder for the attack that killed 13 people and wounded more than 30 others at the Army post in central Texas. It was the deadliest mass shooting ever on a U.S. military base.

Prosecutors insisted there was no question that Hasan planned and carried out the attack.

"The facts I laid out to you give you only one option," the prosecutor, Col. Steve Henricks, told jurors. "The accused without a doubt -- without any doubt at all -- had a premeditated design to kill."

The Army psychiatrist told jurors during a brief opening statement nearly two weeks ago that evidence would "clearly show" he was the shooter, and he described himself as a soldier who had "switched sides."

But since then, he has sat mostly silent. He has raised few objections during the 13-day trial, and he questioned only three of the nearly 90 witnesses called by prosecutors. He also presented only a single piece of evidence: an evaluation from his boss that called him a good soldier.

On Thursday, military prosecutors asked jurors for a unanimous conviction on the premeditated murder charges, which would allow them to seek the death penalty -- the government's priority in the case.

Henricks repeatedly emphasized the word "premeditation," trying to dissuade the jury -- 13 high-ranking military officers -- of even considering a conviction on a lesser charge that would take the death penalty off the table.

"There's no doubt the evidence you heard in this case shows he committed the offense," Henricks said.

Henricks said Hasan asked for the highest-tech weapon available when he went to a gun store a few months before the Nov. 5, 2009, attack, and he soon began practicing at a gun range. Hasan also used laser sights, which Henricks said "established intent to kill."

The prosecutor noted that the shootings, which started inside a medical building crowded with soldiers preparing to deploy, came the same day Hasan's unit was at that building. Hasan was assigned to soon join the unit in Afghanistan on a six-month tour.

The last witness to testify for prosecutors had said Hasan told her shortly before the shooting, without prompting, that the Army would "pay" if he were ever ordered deployed overseas.

"Some things speak for themselves. It doesn't require any evidence -- because it's no coincidence -- that the accused did his crime on Five November," Henricks told jurors.

Henricks also noted that Hasan targeted soldiers, leaving most civilians unscathed. After Hasan fled the medical building, and civilians outside asked him what was going on, "he tells them it's a paintball gun. It's a training exercise. He's keeping his wits about him even after what happened," Henricks said.

Hasan, an American-born Muslim, has been unapologetic about saying the rampage was necessary to protect Muslim insurgents abroad from American soldiers preparing for combat in Iraq and Afghanistan. But most of his arguments have played out through leaks to the media or directly to the judge, so they couldn't be considered by the jury.