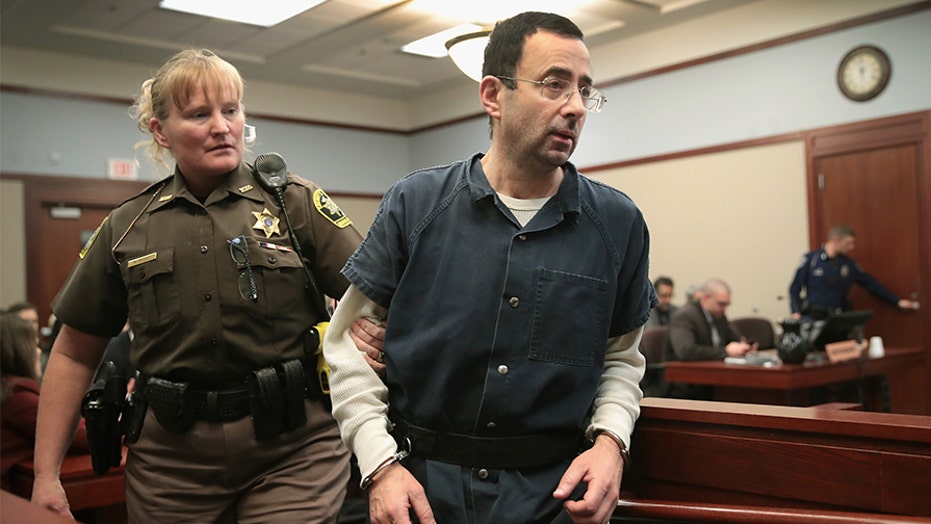 The U.S. Education Department is fining Michigan State University a record $4.5 million and demanding sweeping changes after determining that it failed to respond to sexual assault complaints against Larry Nassar, a former sports doctor at the school who also worked at USA Gymnastics.

Education Secretary Betsy DeVos announced the penalty Thursday after the school settled with the department to resolve two investigations. DeVos said that Nassar's actions were "disgusting and unimaginable" but that so too was the university's response.

"Too many people in power knew about the behaviors and the complaints and yet the predators continued on the payroll and abused even more students," DeVos said in a call with reporters. "This must not happen again there or anywhere else."

The fine is the largest levied under the Clery Act, a federal law that requires colleges to collect data on campus crime and notify students of threats. The previous largest fine, $2.4 million, was imposed in 2016 against Pennsylvania State University over its handling of sexual misconduct involving former assistant football coach Jerry Sandusky.

Nassar has been sentenced to decades in prison for sexually assaulting athletes, mostly female gymnasts, at Michigan State and a Lansing-area gymnastics club. Former Olympians said he also molested them in Texas and overseas while he worked for USA Gymnastics. (Getty)

The department's investigation concluded that Michigan State violated several key parts of the Clery Act along with Title IX, a federal law forbidding discrimination based on gender in education.

A department investigation found that Michigan State violated the Clery Act by failing to disclose crime statistics, failing to issue campus warnings about security threats and failing to establish a system to collect crime statistics. As a remedy, the school says it will hire a "Clery compliance officer" and create measures to protect athletes and children who participate in youth programs on campus.

A separate Title IX investigation found that Michigan State failed to respond to reports of sexual misconduct against Nassar and his supervisor William Strampel, failed to take interim measures to protect students while complaints against both men were pending, and failed to take steps to end any harassment and prevent it from recurring.

As part of its settlement agreement with the department, Michigan State says it will make "substantial" changes to its Title IX procedures and will provide a process to help victims of Nassar, including offering counseling services, grade changes, tuition reimbursement or the opportunity to retake classes at no cost.

The school is also being ordered to "consider appropriate sanctions" against current and former employees who failed to take action after being notified of sexual misconduct by Nassar and Strampel.

Kenneth Marcus, the department's assistant secretary for civil rights, said the agreement represents an "extensive and robust" resolution. Unlike most Title IX investigations, which are usually triggered by complaints submitted to the department, Marcus' office launched an investigation into Michigan State in 2018 based on the severity of the allegations, he said.

"This message should be heard loudly and clearly by all universities so that the tragedy at Michigan State University is not repeated elsewhere," Marcus said.

Nassar has been sentenced to decades in prison for sexually assaulting athletes, mostly female gymnasts, at Michigan State and a Lansing-area gymnastics club. Former Olympians said he also molested them in Texas and overseas while he worked for USA Gymnastics.

MSU last year agreed to a $500 million deal with Nassar's accusers. Most of the money, $425 million, was for 333 people, mostly women and girls, who had already sued. MSU so far has settled with 72 people in the second wave of litigation, but dozens remain.

Strampel last month was sentenced to a year in jail for neglect of duty and misconduct in office. He was accused of failing to monitor Nassar and using his job as a medical school dean to sexually harass students.