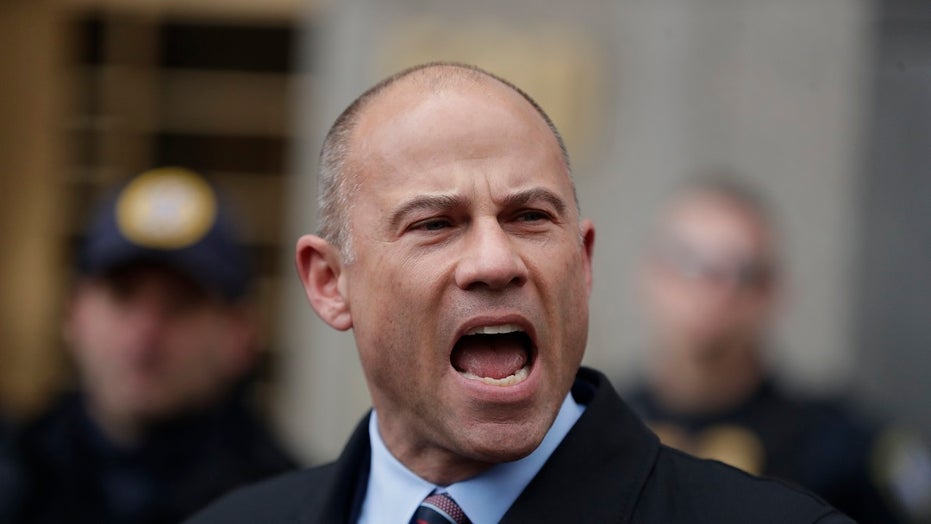 The hot-headed lawyer known for direct messaging his critics on Twitter then promptly blocking them filed the lien in Columbus, Ohio federal court six days after Daniels reached a $450,000 settlement with the city over her arrest at a strip club where she was performing last year. Daniels had claimed that officers conspired to retaliate against her over her claims that she had sex with Donald Trump in 2006, long before he became president. She was arrested on suspicion of inappropriately touching an undercover officer following a performance at Sirens in July 2018, but the city attorney's office dropped charges within hours.

Thursday's filing argues that Avenatti should get first crack at the Columbus settlement money, saying: "no net settlement proceeds or fees are to be distributed to Ms. Daniels or any of her attorneys without the express, written agreement of Mr. Avenatti and/or a full adjudication of this lien pursuant to California law."

Avenatti also claims that Daniels, whose real name is Stephanie Clifford, has not paid him any money for his services to her apart from what the lien described as "a $100.00 [not a typo] up-front payment."

"Despite repeated demands that Ms. Daniels fulfill her contractual obligations and pay for the millions of dollars in legal fees and costs she has enjoyed for her benefit over the last approximate 19 months ... she has refused," the lien continues. "Instead, Ms. Daniels maintains that because she is a 'celebrity,' she is entitled to free legal services and costs, and when confronted with her repeated failure to pay, she believes that she is entitled to manufacture and fabricate facts designed to impugn the reputation of her counsel and falsely accuse him of a multitude of acts.

“But the law does not work that way Ms. Daniels wishes,” the lien notice read.

Daniels' new attorney, Clark Brewster, said he believes Avenatti filed the lien "out of the blue to create some kind of narrative."

"He never had a fee agreement... you can't obtain a fee without a written agreement," said Brewster. He said the professional arrangement between Daniels and Avenatti made it clear he would be paid in the form of a public defense fund, from which Avenatti received around half a million dollars. Brewster said that Avenatti has never even sent Daniels a bill and did not say he was owed money when he and Daniels terminated their attorney-client relationship earlier this year.

"Simple question, could you send us the bills you sent Stormy?" Brewster asked, directed at Avenatti. "In truth in fact he did almost no legal work, all PR stuff. Legal representation, not much, filed a couple of lawsuits, that’s it."

Daniels on Twitter later resounded largely the same argument. "In the Ohio case I recently settled, Avenatti barked loudly to the media but did not represent me nor did I have an agreement with him in the case," said Daniels. "When I met Avenatti he persuaded me to retain him on the basis that I pay him $100 and he would collect fees from a public fund he would generate for my cause." She said Avenatti drained that account of $500,000 "without any true accounting to me."

"In truth Avenatti did very little as a lawyer and mostly engaged in media self-promotion and aggrandizement," Daniels added.

The notice filed Thursday claims that Avenatti terminated his professional relationship with Daniels in mid-February 2019, saying she had become “increasingly difficult, uncooperative, erratic and unpredictable.” The notice also alleged that Daniels began falsely accusing many closely aligned with her of theft.

"[I]n some instances [the accusations] were targeted at friends of 20 years and her private security detail," the lien claims.

Daniels and Avenatti became household names in March of 2018 after she retained his services to sue Trump to nullify a hush-money deal. As part of the agreement, Trump's then-personal attorney Michael Cohen paid Daniels $130,000 days before the 2016 election to keep quiet about the alleged 2006 affair.

Cohen pleaded guilty in August of that year to violating federal campaign finance law by arranging the payment, claiming he did so at Trump’s direction. Cohen is serving three years in federal prison. Trump has denied any wrongdoing.

Avenatti was indicted in May on charges that he cheated Daniels of $300,000 that was owed to her through a Manhattan-based book deal. He also is charged by federal prosecutors in New York with trying to extort up to $25 million from shoe giant Nike by threatening to reveal allegations that Nike facilitated payments to the families of college basketball players to steer NBA-bound talent toward Nike-sponsored schools.

In California, Avenatti faces various charges, including allegations that he embezzled millions of dollars from clients, failed to pay taxes and concealed assets from bankruptcy court.

He has pleaded not guilty to all charges.