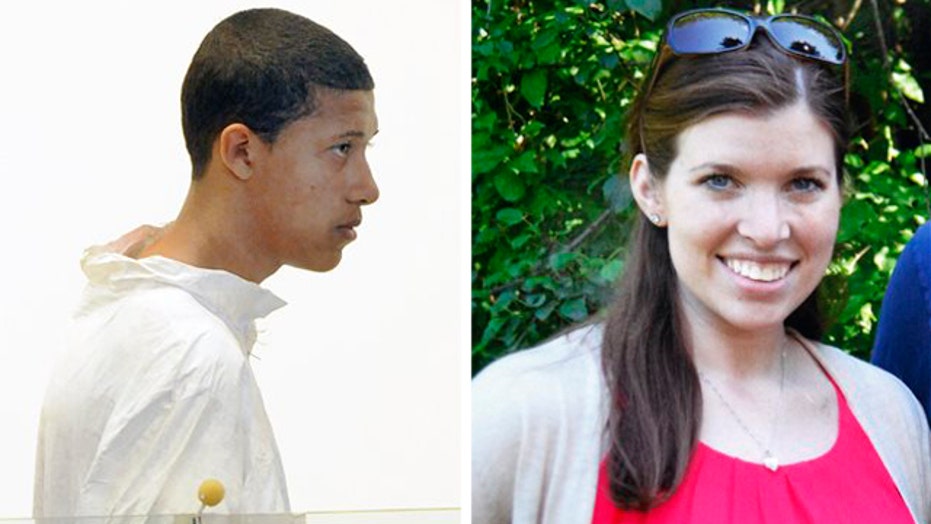 Court documents show a popular Massachusetts teacher who police say was killed by one of her students was found in the woods with her throat slit and a note that read, "I hate you all."

The documents released Friday after requests by The Associated Press and other media organizations say 14-year-old Philip Chism brought a box cutter, mask, gloves and multiple changes of clothing to school the day 24-year-old Colleen Ritzer was killed.

According to the documents, surveillance video shows Chism putting on gloves and with a hood over his head as he followed Ritzer into a Danvers High School bathroom.

The indictment says Chism, armed with a box cutter, stole Ritzer's underwear, credit cards and iPhone. A ruling on her exact cause of death is pending.

Chism used an object to sexually assault his popular high school algebra teacher before killing and robbing her, according to an indictment issued Thursday.

She was reported missing when she never returned home from school. Her body was found in the woods and Chism was found walking along a highway overnight.

Chism was spotted leaving a movie theater about 6:30 p.m. on the day Ritzer was killed, then picked up by police as he walked along a highway in a neighboring town six hours later. Police said they believe Ritzer died sometime after the school day ended at 2 p.m., but they have not said exactly when.

Chism has been held without bail since shortly after the Oct. 22 murder.

Chism had previously pleaded not guilty to a murder charge. A message seeking comment was left with his attorney Thursday. The indictment adds charges of aggravated rape and armed robbery.

Ritzer's family issued a statement saying they continue to mourn and asking for privacy.

"We are devastated and heartbroken by the details of the horrific circumstances surrounding the death of our beautiful daughter and sister, Colleen," the statement said.

Prosecutors have not revealed a motive for the killing, though two classmates said Chism was in Ritzer's class after dismissal the day she was killed.

Chism had moved to Massachusetts from Tennessee before the start of the school year and played on the school's junior varsity soccer team.

Court records indicate Chism's parents had difficulties early in their marriage. In a parenting plan included in 2001 divorce papers, his mother, Diana, insisted on supervising any time her husband, Stacy, had with their son and a younger daughter.

She cited "prior physical and emotional abuse as well as alcohol abuse" by her husband. Both adults signed the papers.

The divorce was apparently never finalized after both parents signed an order stating they wanted to attempt to reconcile.

Shortly after the killing, Diana Chism released a statement through her son's public defender saying she was heartbroken for Ritzer's family.

Ritzer was described as an enthusiastic, caring teacher who stood outside her classroom and greeted all students, whether they were in her classes or not.

Ritzer's family has established a scholarship to honor her work. It will benefit graduates of Andover High School, in her hometown, who pursue teaching careers.