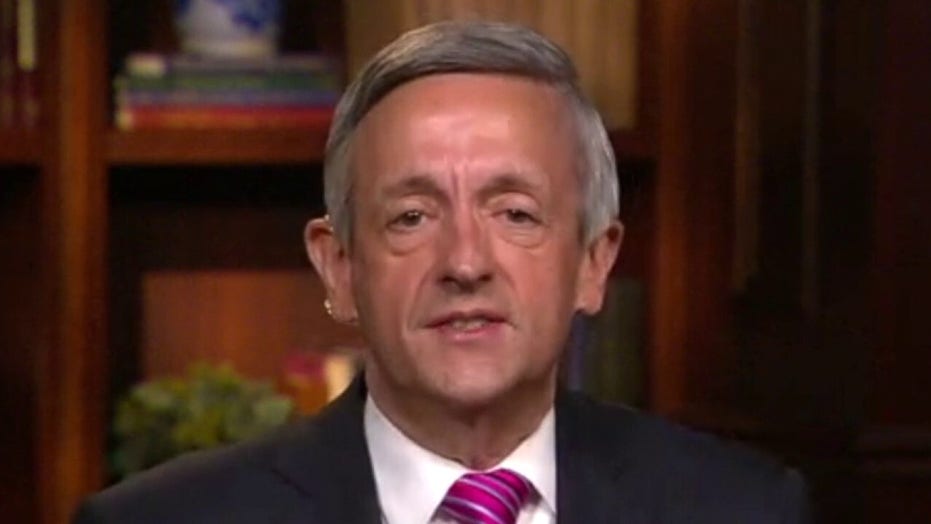 The embattled Louisiana pastor who repeatedly flouted social distancing measures defied house arrest by hosting a large gathering of congregants for a Sunday service in defiance of orders to stay at home to limit the impact of the coronavirus.

Pastor Tony Spell of the Life Tabernacle Church in Baton Rouge was seen on a live stream Sunday walking among more than 100 congregants, often repeating the phrase, “I’ve just got to get to Jesus. ... Come on America, let’s get back to Jesus.”

Nearly all parishioners were not wearing face masks, and social distancing was not being practiced, The Associated Press reported.

Spell had been placed on house arrest at 9 a.m. Saturday morning after refusing to tell a judge if he’d continue to hold Sunday services.

A Facebook Live video shared by Central City News showed the pastor playing the piano surrounded by family members inside his home. A man wearing personal protective equipment had Spell sign paperwork before fitting him for an ankle monitor.

“Tomorrow at 12 o’clock, my voice will be silenced for several months,” he said, referring to his normal Sunday service. “You will not hear from me again. I promise you, I will continue to do what I do. This is not about me. This is about our religious liberties.”

Spell, who has also been accused of nearly running over a protester with his church bus, appeared before a state district judge Friday but refused to clarify whether he would continue to hold in-person religious services over the weekend in defiance of Democratic Gov. John Bel Edwards’ stay-at-home order, The Advocate reported.

Judge Fred Crifasi of the 19th Judicial District Court asked Spell if he would comply with the order that’s required all non-essential businesses, including churches, to shut their doors, and has limited gathering to no more than 10 people.

Citing Bible verse 1 Peter 3:14, Spell responded: "But and if ye suffer for righteousness' sake, happy are ye: and be not afraid of their terror, neither be troubled," according to District Attorney Hillar Moore III.

When Crifasi asked a second time, Spell remained silent, something the judge interpreted to mean the pastor would once again fail to adhere to social-distancing measures.

This photo provided by the East Baton Rouge Parish Sheriff's Office shows Tony Spell, who was taken to jail on April 21, 2020, after being arrested by police in Central, Louisiana, on charges including aggravated assault. Officials in Louisiana arrested the pastor, who allegedly drove a bus at a man protesting the pastor's continued defiance of orders to stay at home to limit the impact of the coronavirus pandemic. (East Baton Rouge Parish Sheriff's Office via AP)

Spell was released from Parish Prison Tuesday on a $5,000 bond provided he “refrain from any and all criminal conduct, including but not limited to strictly abiding by the all emergency orders issued by the Governor of the State of Louisiana," The Advocate reported.

Dozens of Spell’s parishioners met him at the prison in East Baton Rouge dressed in their Sunday best, arriving in church buses to show support. In a livestream from the church, images including photos from Spell’s arrest, as well as information for a GoFundMe account to help with his legal costs, played over music being performed at the church, according to the Associated Press.

He had turned himself in after a warrant was issued for his arrest a day earlier, the Central Police Department said. He was charged with aggravated assault with a deadly weapon and improper backing of a vehicle related to an incident the weekend prior.

“That man has been in front of my church driveway for three weeks now,” Spell told WAFB-TV on Monday. “He shoots people obscene finger gestures and shouts vulgarities. I was pulling in from my bus route, picking up black children who haven’t eaten because of this sinister policy that has closed schools. I was going to approach this gentleman and ask him to leave.”

While most churches have transitioned to virtual religious services amid the coronavirus pandemic, Spell continued to hold in-person services with hundreds of followers despite a stay-at-home order issued by the governor.

Last month, Spell was arrested and charged with six misdemeanor counts for violating the order. Speaking to Fox News after that arrest, the pastor said he was exercising his First Amendment rights and a mandate from Jesus Christ.

His attorney, Jeff Wittenbrink, was hospitalized two weeks ago after contracting the virus himself. One parishioner who attended services at the church reportedly died from COVID-19, reports said.