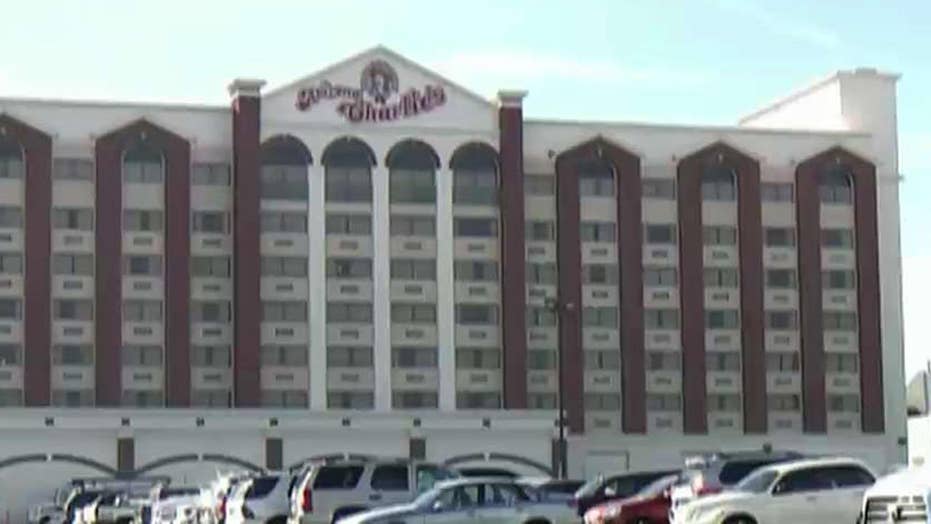 Gunman is not expected to survive a self-inflicted shot to the head.

A gunman was not expected to survive a self-inflicted shot to the head after he allegedly fatally shot two security guards in a Las Vegas hotel room Saturday morning.

The suspect, identified as Christopher Olague, 29, was being treated in a hospital Saturday evening, police said.

"I want you to know right now that this has nothing to do with terrorism," Capt. Robert Plummer of the Las Vegas Metropolitan Police Department told reporters near the shooting scene, in a city still reeling from an Oct. 1 massacre in which 58 people were killed.

Police said the uniformed security guards killed Saturday were a man and a woman in their 40s and that one was armed. Their identities and causes of death will be released by the Clark County Coroner's Office.

The gunman's motive wasn't known but investigators believe it was an isolated incident.

On Saturday, a woman staying at Arizona Charlie’s Decatur hotel and casino called security to her room before 6:35 a.m., claimning that two men whom she’d invited into the room had forced her out, the Las Vegas Review-Journal reported.

When the two security guards arrived, they found only one of the two men inside.

According to witness statements and a surveillance video, the man – later identified as Olague – let the guards into the room, where an argument ensued, followed by gunshots. Police said the woman did not use her gun.

The suspect fled the room, and fumbled two carjackings before jumping over a wall into the backyard of a home. The homeowner prevented the suspect from entering through the backdoor, but he was able to enter the garage as police arrived.

As police closed in, the suspect shot himself in the head, Metro homicide Lt. Dan McGrath said.

The suspect was taken to a hospital to be treated for his wounds, which, according to McGrath, were not survivable. The suspect was facing multiple felony charges, including murder, attempted murder, burglary and attempted robbery, McGrath said.

According to McGrath, police have not been in contact with the woman who initially called the security guards or the second man who was in the room. McGrath said the circumstances of what happened in the hotel room were still unclear.

The victims' identities have not been released.

The shootings came a day before law enforcement officers expected tens of thousands of New Year's Eve revelers on the Strip and three months after the city dealt with the deadliest mass shooting in modern U.S. history.

Officials have been trying to reassure residents and visitors that the city is safe, especially in the wake of the Oct. 1 shooting. A high-stakes gambler killed 58 people and injured hundreds more after he shattered the windows of his suite on the 32nd floor of the Mandalay Bay hotel-casino on the Strip and unleashed gunfire on a country music festival below. He then killed himself.