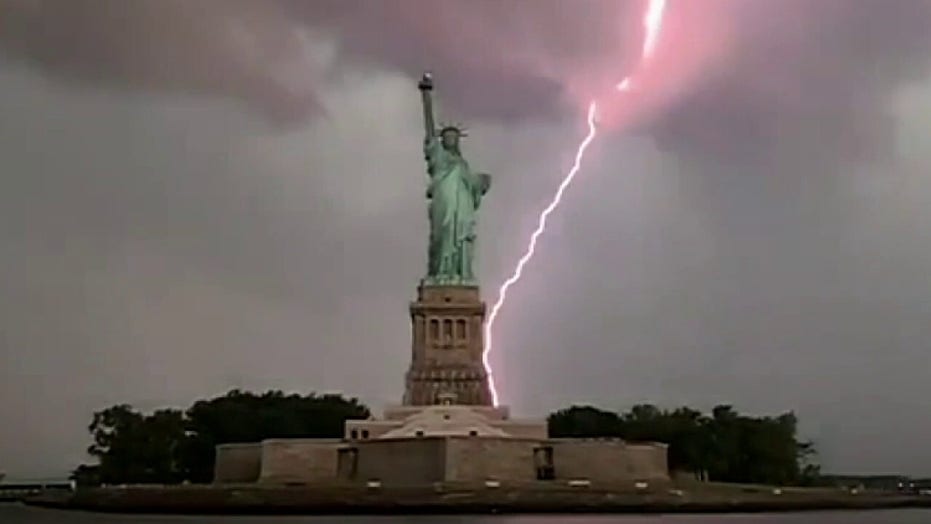 Lightning strikes behind the Statue of Liberty

Lightning strikes behind the Statue of Liberty.

How strong is Lady Liberty? Strong enough to withstand a lightning strike.

Suddenly, a bolt of lightning descends from the heavens and strikes near the pedestal of the famous statue – which has served as a beacon of hope for both native-born Americans and immigrants since arriving as a gift from France in the 1880s.

Just as suddenly the flash is gone – with no sign of damage to the statue or to Liberty Island -- between New York and New Jersey in New York Harbor -- which serves as the statue’s home.

Just two days earlier, the island was partially reopened to visitors after being closed since March because of the coronavirus pandemic.

The grounds of the island are now reopened, as are some food and gift shop services – but the interior of the statue and the island’s two museums remain closed, New York’s WABC-TV reported.

In addition, the ferry boats that carry visitors to the island from both the New York and New Jersey sides have reduced capacity rules in effect, with social distancing markers and signs also in place, the station reported.

Nearby Ellis Island, which served as a processing center for millions of immigrants to the U.S. before being closed in 1954 and then later opened as an immigration museum, remains closed, WABC reported.

As the virus outbreak continues, it remained unclear when both attractions would have their normal operations fully restored.