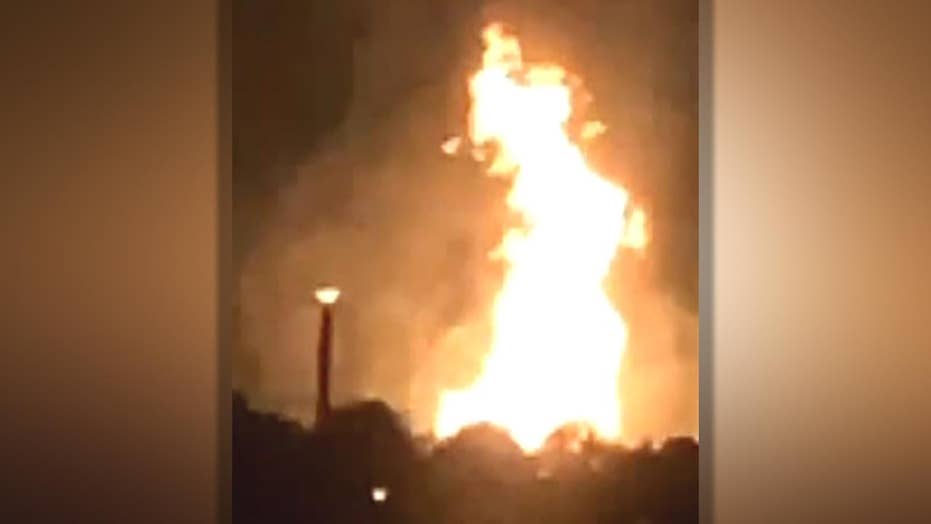 Raw video: Officials say a gas line burst sparking a large fire in Lincoln County, Kentucky. The blaze could be seen from miles away.

At least one person is dead and five others have been hospitalized after a massive gas pipeline explosion in Kentucky on Thursday morning that caused a “tremendous amount of damage” and forced the evacuations of more than 75 residents.

FIRE AT JIM BEAM KENTUCKY WAREHOUSE CONTINUES TO BURN AS 45,000 BARRELS OF BOURBON ARE DESTROYED: REPORTS

Initial speculation was that a train or plane had crashed, causing the massive blast. But once on the scene, officials quickly discovered a 30-inch pipeline belonging to the Texas Eastern Transmission Pipeline was the cause of the explosion.

Gilliam said the initial blast could be seen several counties away as the flames reached heights of more than 300 feet. At least six structures were damaged in the fire, which left a “tremendous amount of damage.” Officials did not say if those buildings were all residences.

At least 75 people in the subdivision were evacuated to a shelter at New Hope Baptist Church. Several more people evacuated themselves to the shelter.

Officials confirmed that at least one person was killed because of the blast but, because the debris was still too hot, rescue teams could not reach the victim.

Gilliam said that five people were transported to the hospital but noted there are still several more residents unaccounted for.

“The next phase of this effort will be to identify folks that are missing or are unaccounted for," he said. "At this point, I think there is five to seven persons that we don’t actually know their whereabouts.”

He said the smoldering debris has hampered search efforts.

It was not immediately clear what caused the fire but officials said they will continue to investigate the scene throughout the day.