Gov. Andy Beshear said in a Tuesday media briefing that more bodies had been found overnight.

"Let us pray for these families and come together to wrap our arms around our fellow Kentuckians," he said, before warning of more isolated storms that would impact the region.

Additional wet weather is forecast in Kentucky this week and next week.

The governor also cautioned that high winds could bring the threat of falling trees and utility poles, and that coming dangerous heat could complicate efforts.

"Listen, I know you may be out there working to salvage whatever you can, but be really careful. Wednesday and Thursday, when it gets hot, we're bringing in water by the truckloads," he said.

Rescue and recovery operations are still underway following the devastating flooding event that started last week that brought 8 to 10 1/2 inches of rain in just 48 hours in Kentucky and parts of Virginia and West Virginia.

According to tracker PowerOutage.US, more than 10,000 customers in Kentucky remained without power on Tuesday morning, as well as more than 21,000 in Indiana after storms tracked through the Hoosier State.

Hundreds of people are staying in shelters – homes and vehicles were left completely flooded – and curfews were ordered in Breathitt County and Knott County after reports of looting. 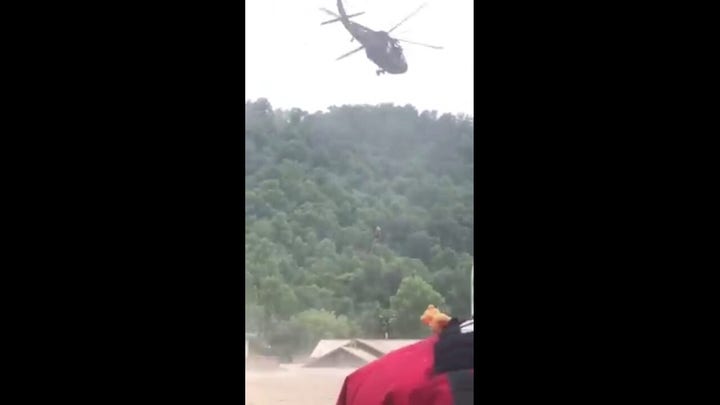 "I hate to have to impose a curfew, but looting will absolutely not be tolerated. Our friends and neighbors have lost so much. We cannot stand by and allow them to lose what they have left," County Attorney Brendon Miller said in a Facebook post.

The cost of the flood damage is "hundreds of millions of dollars," according to Beshear.

If someone wants to report a missing person, they are asked to call their local Kentucky State Patrol post instead of 911.