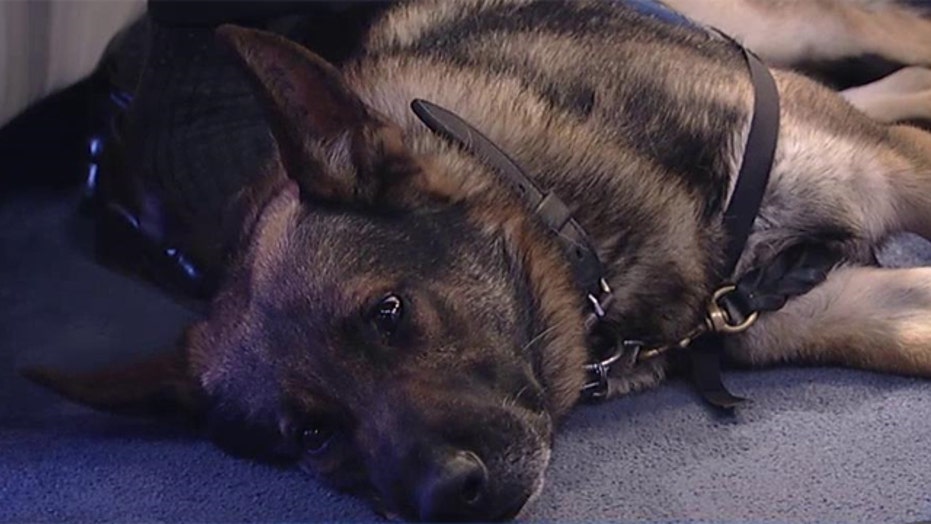 Vets hope amendment will allow for adoption of military dogs

Act would replace 'shall' with 'may'

One week before Kathleen and Drew Barton were deployed to Afghanistan in 2014, the Mays Landing, New Jersey, couple were still searching frantically for a temporary home for their two large dogs. Their original pet care plans had fallen through and they were desperate for a new solution.

All their family and friends had their own pets to take care of, and putting the dogs in a kennel was far too expensive.

“Thankfully, I found PACT, or People, Animals, Companions, Together,” said Kathleen Barton. “I was blown away at the love and compassion they had for my dogs.”

A nonprofit that helps military personnel find foster homes for their animals while they serve overseas, PACT was created by retired lawyer Buzz Miller. In less than 24 hours Miller found a temporary loving home for the Bartons’ two dogs, Sasha and Vada.

"They are risking their lives," Miller said about American military servicemen and women. "Now, they have one less thing to worry about. And they get regular email updates about their dogs from the dogs’ foster parents."

Miller founded PACT in 2010 out of his Gladwyne, Pennsylvania, home. He and his wife have been rescuing cats and dogs for years. They both volunteer at a local rescue. "I remember seeing these big burly guys, about to be deployed, sitting on the floors of shelters crying their eyes out because they had to leave and had no alternatives for their pets. Most of these shelters were kill shelters."

PACT started out locally and now helps military personnel all over the country.

Petra Torri was determined to find a temporary loving home for her mini Cocker Spaniel, Coco, and her Jack Russell Terrier, Bella. The Florida native has lived with Coco for 6 years and Bella for 7. She found PACT online.

"I was going to train at the Office of Military Intelligence and couldn’t bring my dogs with me," she explained. "My boyfriend is also in the Army, and he could be deployed during that time. My friends and family either have dogs or are serving in the military and can’t foster. And pet sitters charge a lot for the seven- or eight-month period I would be training. It was too expensive."

"Buzz (Miller) asked if I would fly my dogs up to Pennsylvania," said Torri. "Within a day he put me in touch with Lorrie and Michael Manacchio, who agreed to foster my dogs."

The Manacchios found out about PACT from a news segment on TV, and wanted to foster. They have two large dogs, Pluto, a 6-year-old Golden Retriever, and Gracie, a 10-year-old Chow mix.

"I was a bit concerned about leaving my small dogs in the company of a family with two large dogs," said Torri. "Buzz assured me he checks out the homes of every foster family, and would never put a dog in a dangerous situation. In fact, they don’t work with aggressive dogs."

Torri also liked the fact that Michael Manacchio is a veteran. "I spoke to Michael, and since he served in the military, he understood the stress I was feeling about leaving my dogs behind," she said. "He assured me that he and his wife, Lorrie, would take good care of Coco and Gracie."

The Manacchios took the day off from work when Torri, Coco, and Gracie arrived in Pennsylvania. "I wanted to be here to meet Petra, Coco, and Gracie," said Lorrie Manacchio, who works for a pharmaceutical company, as does her husband. "Buzz was concerned Michael and I work full time. He wanted to make sure someone would be here to watch and take care of the dogs while we were at work."

Lorrie Manacchio's 83-year-old father, also a veteran, lives nearby and comes up every day for breakfast and lunch to walk the dogs and spend time with them. "He has a standard Poodle, and when he retired from teaching, he became a dog trainer," said his daughter.

Torri could tell that all of the dogs got along well from the photos and e-mails the Manacchios sent her. In some of the photos, the dogs were taking turns sitting on Lorrie’s lap lounging on an inner tube while floating in the Manacchios’ pool. Other photos showed the dogs playing with toys and balls.

"We now feel like our family has expanded, thanks to PACT," said Lorrie Manacchio.

PACT doesn’t charge for its services. However, the group asks pet owners to provide enough money for veterinary care. Often the host family pays for pet food, and all pets in the program must be spayed or neutered.

Buzz Miller doesn’t take kindly to people who give up their cats, dogs, birds, or other animals because of a move, a divorce, or tiring of caring for their pets. "Adopting a pet is a commitment," he explained. "You just can’t toss aside a family member. People in the military often have no other choice."

Miller also spends time looking for funds to help defray the operating costs for his small staff. PACT has received grants from Petco, Banfield, and the Dreyfus Foundation.

Marine Walks Again, with a Little Help from Tech

You’ve Had a Baby. Great. Now Make Some Friends.

10 Smart Brands and Their Good Causes